Imre Szellő Could Be Set for World Title Shot

Hungarian cruiserweight champion Imre Szellő has put himself in the frame for a shot at the WBO world cruiserweight title, currently held by Ukraine’s Oleksandr Usyk, after he kept up his unbeaten professional record with his 17th straight win coming over Tamás Tóth at the Lakeside Hotel, Székesfehervár.

Szellő is arguably the brightest boxer in Hungary today and in beating Tóth, he defended the WBO intercontinental title, which boosts his ranking with the organisation and adds his name to the list of possible contenders for Usyk in the near future.

It was Szellő who took control of the contest from very early into the bout, as he dominated with the jab and forced Toth to be on the back-foot. Eventually, Szellő pushed for the stoppage in the fifth round and he got it when referee Micky Vann stopped the fight as Toth was struggling to see due to a cut above his right eye.

The 34-year-old competed at the 2008 Olympics in Beijing but only made his professional debut in 2014. He won the Hungarian cruiserweight crown after just his second fight, where he beat Gyula Bozai by unanimous decision after ten rounds. 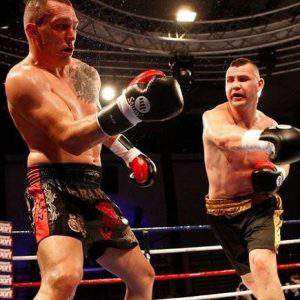 Szellő took a big step towards a world title shot when he won his intercontinental title, where he defeated Brazilian Hamilton Ventura for the belt last September. Since then, he has had wins over Drazan Janjanin and Garrett Wilson; the former of which he beat by technical knockout in the seventh round of their contest.

If Szellő does sign a deal to fight Usyk for the WBO cruiserweight title, he will be facing the number one ranked boxer by The Ring Magazine in the division. The man, who is nicknamed The Cat, won the gold medal in the heavyweight category at the London Olympics. He has not tasted defeat yet in his professional career, which spans 12 fights, while ten of those victories have come via stoppages.

Usyk won his world title back in September when the judges unanimously gave him the decision over Poland’s Krzysztof Glowacki in an excellent performance in Gdansk. Since then, he has defended his title twice, beating Thibiso Mchunu and Michael Hunter.

Szello’s promotional team will also be looking at the other options in the cruiserweight division. WBA champion Denis Lebedev and IBF holder Murat Gassiev are set to meet in a unification contest later this year. Gassiev beat his Russian compatriot in a split decision last December. He is the odds-on favourite at 1/2 to get the better of Lebedev again. If you are looking to have a bet on that contest though, it may be worth taking a look at the sign-up offers available from the leading bookmakers, which can be found on comparison sites such as www.latestbettingsites.co.uk .

The other world champion in the cruiserweight division who has yet to announce his next fight is Mairis Briedis. The Latvian won the WBC belt which was vacated by Tony Bellew when he got the better of Marco Huck earlier this month.

Whatever route Szellő goes down, it is only a matter of time before a world title shot is presented to him where he’ll be looking to add his name to a Hungarian boxing history.