The Paprika Project – Since we met ten years ago,  Anita and I have often discussed owning a little plot of land; a place we could escape to and live disconnected from the all pervasive “Evening News” bullshit.  Living in Southern California we realized that without an obscene amount of money we wouldn’t  be able to afford much, except maybe a patch of sand in the barren Mojave Desert. We talked about land in other less expensive states too, but decided we would then be close to neither of our families. 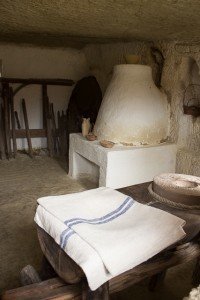 After being fortunate enough to sell our business last September, we came to the conclusion that Hungary was our best bet. Anita’s family and friends are here, land is extremely affordable compared to California, and most importantly we were past due for a new life-altering adventure.

Hungary has truly grown on me since my first visit ten years ago. I love the effortless connection to the land people have here. I love that people grow their own food and forage for mushrooms in the forest. That a patch of yard isn’t only used for the perfect lawn, but for growing vegetables and fruit trees. I love the ingenuity and creativity people possess for re-purposing things, fixing broken items and building their own furniture. I’ve also met so many generous and genuine people here that I feel I can be myself and be accepted, despite obvious cultural differences. 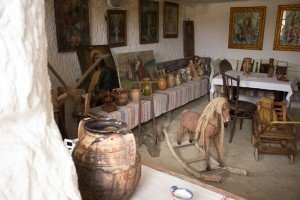 Hungary definitely has it’s drawbacks of course, and I’m not promoting it to be some kind of Utopian escape full of smiling people and bountiful opportunities. That it is surely not. Nevertheless, I feel Anita and I can create our little paradise here. Our own oasis of lush gardens filled with fruit and vegetables and perhaps—if we’re lucky—a place complete with a funky old wine cellar.

This past week we made our first trip to Eger since moving to Hungary. I had been there briefly in 2007 and instantly took a liking to this historical city. This time, curious to see more of the Bükk National Park, we took the mountain road from Miskolc to Eger. With soft morning light filtering through the bare beech trees, we snaked our way through the forest in our blue Opel Corsa. It was a beautiful hour long drive and I was glad we had chosen the scenic route.

A few months ago we decided that somewhere near Eger would be a nice place to live. There is ample culture and fascinating history in the region, the landscape is a mix of rolling hills and plains and most importantly it is an internationally renowned wine region.  You may have heard of Egri Bikavér (Bulls Blood from Eger), the area’s famous full-bodied red. 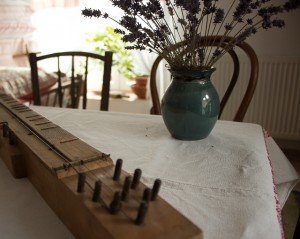 Searching the internet a day before our trip, we found two properties that caught our fancy: One was nestled into a hillside in Almar, a village a few kilometeres outside of Eger.  The ad’s photos showed a nicely maintained—if not small—home, a large plot of land with fruit trees, a vegetable garden, grape vines, an onsite well and a wine cellar. The other property crowned a hill and featured an extensive vineyard and what appeared to be a large house.

Well, after calling the owner we discovered the large house belonged to the neighbor. With that in mind we passed on the hillside property; building a house is not on my list at the moment. For one reason or another we forgot to call the owner of the Almar property, and only did so when we were in nearby Szarvaskő the next day. It was of course late notice and the owner suggested we see it in the Spring, when there would be less mud.

Feeling sleepy in the gloomy weather, we ducked into the Szarvaskő Vár Presszó  for coffee. Though it was only 10 a.m., two ruddy faced men were already whetting their whistles with beer. After finishing our coffees Anita asked the men how long it would take to hike to the castle ruins that towered over the village.

“Well, are you from the Alföld Plain?” The thinner of the two asked.

“Then it will only take you 30 minutes. If you were from the Alföld it would take you 45,” he said chuckling.

Good one. You see, Miskolc is quite a hilly place and the Alföld  is a huge swath of flat plains. The two then told us in all their drunken seriousness that it would indeed take us 3o minutes, and that we should drink another coffee in preparation.

15 minutes later Anita and I stood at the top. The views were nice, but with a gloomy sky, not breathtaking. The castle ruins were actually not much more than a pile of rocks. Without a set agenda, we hiked back down to the car and set off towards Eger.
Hiking back from the castle ruins in Szarvasko.

As we drove through the city we decided to head on to Egerszalók for some wine tasting. We crested gentle hills carpeted in dormant grape vines and then dropped into the small town of Egerszalók. Spotting a sign for the St. Andrea Winery (the only winery we’d heard of) I hung a left onto Ady Endre Utca.  After passing numerous restaurants and wineries on the touristy stretch we came to St. Andrea. 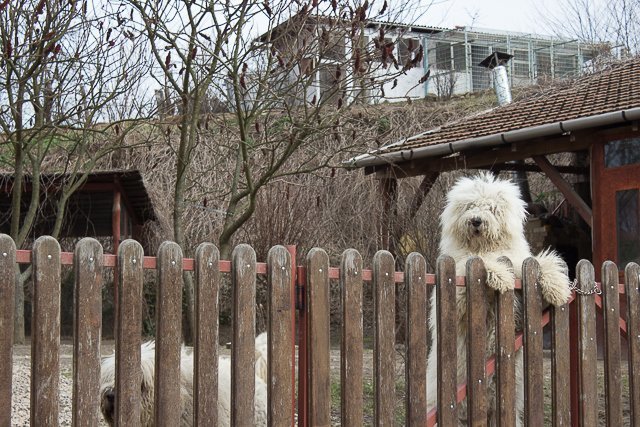 We stepped inside and unfortunately they were in the middle of some minor renovations. It wasn’t exactly the ideal atmosphere for wine tasting and the woman working there wasn’t exactly helpful. She seemed confused about what to do with two visitors wanting to drink wine at a winery. Needless to say, we left.

Minutes later we made our way back to the village’s main road and popped into the local tourist office. Anita stocked up on brochures and with our new found knowledge we set our sights on the Egerszalók cave dwellings.

Thick grey clouds swirled in the sky as we approached what turned out to be a very cool set of white-washed homes carved into 20 ft high volcanic tufa cliffs. Some of the houses were inhabited up until the 1960’s and the site has benefitted greatly from recent renovations. The small rooms were nicely laid out with traditional tools and furniture harking back to simpler times. A large wooden grape press graced the front yard.

Back at the car, the weather was looking ominous as we scanned our map for a winery to visit.  Anita got directions from two women and we were soon off to the Hangácsi és Fia Winery. Up a steep lane, behind a burned out house, we arrived at the somewhat uninviting industrial building. Two men in dirty blue coveralls worked on machinery in the yard.

Anita and I entered. An overflowing ashtray and empty wine bottles littered a table. Eventually the smaller of the two men came inside. After a brief discussion in Hungarian, we gathered that they were more of a wine wholesaler than a tasting room. Regardless, the man (who bore a slight resemblance to Matt LeBlanc,we’ll call him Joey) warmed up a bit and motioned us onto a metal platform. With a jolt, the platform descended down into an expansive, cavernous underground wine cellar. Huge red hooped oak barrels lined the passageways. 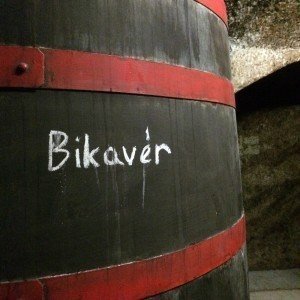 Joey proceeded to pour us generous glasses of Kékfrankos, followed by an exceptional Cabernet Sauvignon; both oaky and robust. We hopped back on the wobbly platform and descended down again. Here the barrels were enormous, some as big as our Opel.

Joey was now quite happy to have a break from his typical day and began smiling as he spoke. He next propped a ladder against an enormous barrel labeled Bikavér, and with his wine thief filled our glasses halfway with the rich red wine. Joey watched proudly as Anita and I sipped and nodded our approval. The Bikavér was fiery and deep. In the cool cellar, surrounded by barrels, we realized that we’d stumbled upon a wine experience that was both serendipitous and unique.

I’m certainly no wine expert but I know what I like. I’ve been to wineries in both Napa and Santa Barbara, California. And for the most part it wasn’t my scene. If you don’t look the part or appear wealthy, you’re somewhat shunned. And to top it off everything is simply overpriced. I have no problem with fancy— I like fancy. Thirty dollar glasses of wine are damn good. But sometimes pretty good and simple is best.

We left Hangácsi és Fia with two 1.5 liter bottles of wine, one Bikavér the other Cabernet. Total cost: $6.00, including the tour and tasting.

Leaning against the car looking out over Egerszalók from the winery’s hilly perch, we both agreed that we could definitely live around here. With an abundance of world-class wine, a beautiful city like Eger to explore, thermal baths and the nearby Bukk Mountains, what’s not to like? Who knows, ,maybe if we play our cards right we’ll soon be producing our own small batches of the good stuff.

For the time being, Hungary's ruling Fidesz party will not be expelled from the…
Nobody has fonder memories on Budapest than the members of the Spanish women water…