The Holy Crown returned to Hungary 40 years ago on 6 January 1978 after a long journey. The crown and the coronation jewels were delivered in front of the Parliament in a ceremony. After both the Hungarian and the American national anthem were played, USA minister of international affairs Cyrus Vance gave a speech, to which the Hungarian minister of the national assembly, Antal Apró replied.  The national relics were taken to Austria at the end of World War II to save them from the approaching Soviet forces.

As 24.hu describes, the Holy Crown is a relic consisting of two parts: the bottom one is the Corona Graeca (“Greek Crown”), and it originates from Byzantine, while Corona Latina surrounds it with its decorated brands.

The cross on the top of it was probably put there during the 16th century. It was tilted a bit due to an accident in the 17th century. It is most likely that someone shut the chest holding the crown when the relic was not yet placed there properly.

Another, less probable theory claims that Hungary’s first Christian king, Saint Stephen was crowned with it. Some even state that the crown belonged to the Hun prince Attila. Even the different origins of the two halves were revealed only in 1978. 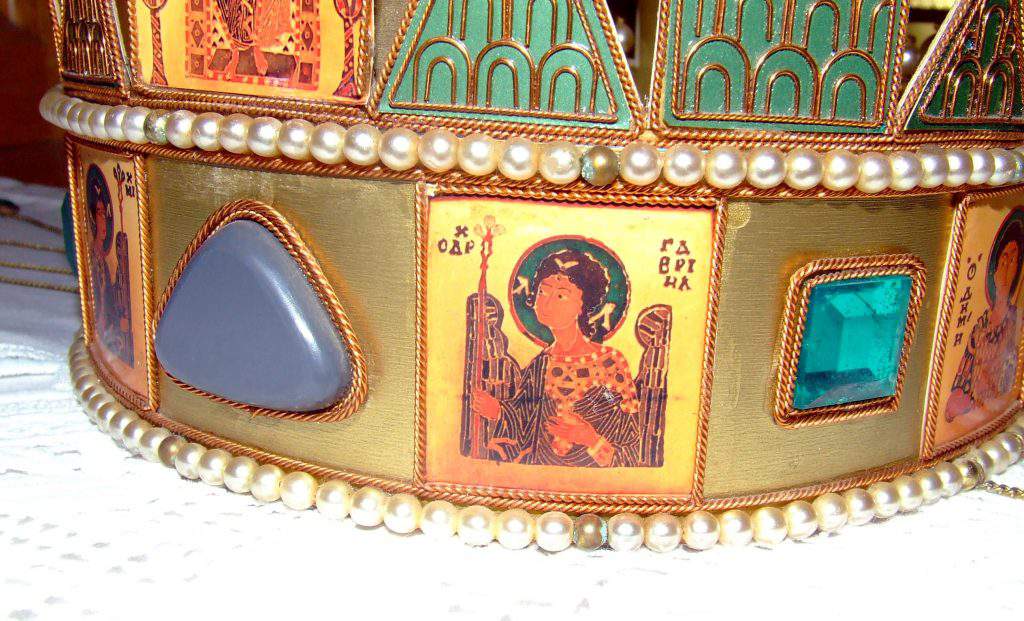 If it is indeed the crown that was used throughout the entire Hungarian history, then it was worn by 55 different monarchs. There were three kings (Wladyslaw III, John Sigismund and Joseph II) who were not crowned.

According to Szent Korona Társaság, it was first taken away from Hungary after the last ruler of House Árpád died in 1301 and Wenceslaus II brought it to Prague. It was seised by Otto of Bavaria in 1305 — it is said that he accidentally dropped it and it was lost for a day. Charles Robert, who was the king after eight years of interregnum, was crowned with a spare crown. The real one was in possession of the Voivode of Transylvania at that time.

The Holy Crown was taken away once again when King Albert of Habsburg died and his widow queen smuggled it in a pillow to Vienna.

It was claimed by Holy Roman Emperor Frederick III, from whom King Matthias purchased it in 1463. After the tragic defeat in Mohács in 1526, the crown was seised again by the Habsburgs. It was brought back to Hungary in 1608, where it was guarded in the tower of Pozsony (Bratislava). It was moved again to Buda in 1790, but it stayed there for only a short period: the Holy Crown was saved by Kossuth and his men at the end of the War of Independence in 1849, who buried it in Orsova in a wooden chest.

The Austrian authorities found it in 1853. After the Austro-Hungarian Compromise in 1867, Emperor Franz Joseph I was crowned with it. After the defeat in World War I, the Hungarian Soviet Republic decided to destroy or sell the Holy Crown, but luckily none of these happened.

The last monarchs crowned with it were Charles IV and his wife, Zita on 30 December 1916.

Then the members of the Hungarian Arrowcross Party moved it to Austria and buried it in Mattsee in March 1945.

The commander of the crown guard was taken captive by the Americans in Frankfurt, who transported the Holy Crown to Ausburg for a couple of years. It was taken to the USA in 1951. It was guarded by an armoured battalion in Fort Knox military base in Kentucky, along with the main gold reserve of the American ministry of finance. It is said that the chest containing the crown was labelled as “radioactive flying object”.

The communist tyranny and the cruel oppression of the Revolution of 1956 and the Prague Spring resulted in a hostile USA-Hungary relationship.

The situation became appropriate for discussing the return of the Holy Crown only in the 1970s.

President Jimmy Carter made it possible to return the crown to Hungary in 1978. The Americans gave several conditions on giving the crown back, including the public presentation of the relic and the absence of communist chief secretary János Kádár at the ceremony, according to Múlt-kor.  The American airplane with the Holy Crown arrived on 5 January 1978. The relic was returned to Antal Apró by diplomat Cyrus Vance.

After preserving it in the Hungarian National Museum for decades, it was taken to the Parliament on 1 January 2000, which has been its final destination yet.

The government asks Hungarians to exercise caution when travelling abroad, even if…

As of August 20, the birthday of the Hungarian state and a national...