Attila Ambrus, the Whiskey bandit, is probably the most well-known criminal in Hungary, whose life inspired moviemakers in 2017. Apart from Ambrus, other criminals are still hiding from authorities or are already arrested by the Hungarian police. These three persons listed in this article are among the recently most wanted criminals, who are not yet been caught by the police. So here we introduce three people from the top 50 most wanted criminals by the Hungarian Police Department.

Hungarian police are keeping track of the top 50 wanted criminals on police.hu, reports index.hu. Out of these fifty criminals, 21 are wanted for fraud, deed of forgery, embezzlement or theft. There is only one murderer, and 5 women on the list of the 50 suspects. Six of the fifty criminals are considered particularly dangerous.

Here is the list of the most dangerous people from Hungary:

The 39-year-old Hungarian man was born in a small Serbian town. Hungarian Police issued a warrant for the arrest of Csaba Dér in September 2018. At this time, the man killed a contractor, behind Pólus Center’s parking lot, most likely because of an untied business payment. He probably has killed somebody again at the beginning of January, Serbian Police supposes. Dér already spent 13 years in prison, because of a 2004 murder. He shot the local mafia boss in a restaurant called Marina; then he left cold-blooded by bicycle. Csaba Dér was sentenced for 15 years in Mitrovica jail, but was released in 2017 after 13 years due to ‘good behaviour’.

The 41-years-old Róbert Farkas is the one, who is wanted for the longest time by the Hungarian Police. He has an arrest warrant for 10 thefts, where he was carrying guns to intimidate. The very first one was in August 2002, seventeen years ago. According to blikk.hu’s 2016-article, Farkas took part in the early 2000s in pawnshop robberies, having been stolen hundreds of millions of Forint cash. Róbert’s robber name is ‘Varjú’ meaning ‘Raven’, his original Hungarian surname ‘Farkas’ means Wolf in English. 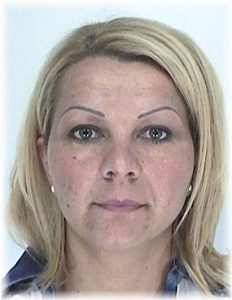 Andrea Dudla, ‘Queen of the swindlers’

Andrea Dudla is one of the 21 wanted person, who is wanted for non-violent actions, including fraud and swindling. The police have been searching Andrea since 2012, who is supposed to be on a final penalty by now but is not found yet. She is believed to be hiding in Thailand, from where one of her crime partners was captured. In the 2000s the woman and her two accessories pretended to be real companies, in order to borrow hundreds of millions of Forints from banks. The cheaters created fake invoices, real-looking-like balance sheets. According to civishír, they could illegally loan about 400 millions Forints. They have also sold 4400 tons of corn for 250 million Forints, but they never handed the corn to anyone.

Find out more about notorious Hungarian criminals here, or watch the trailer of ‘The Whiskey Bandit’ movie here.