Budapest, May 6 (MTI) – Prime Minister Viktor Orbán met Angel Gurria, Secretary General of the OECD, in Budapest, the prime minister’s press chief told MTI on Friday. “Strong economic growth has returned” to Hungary, the OECD said in a survey, putting GDP growth at 2.5 percent in 2016 and 3.0 percent in 2017. 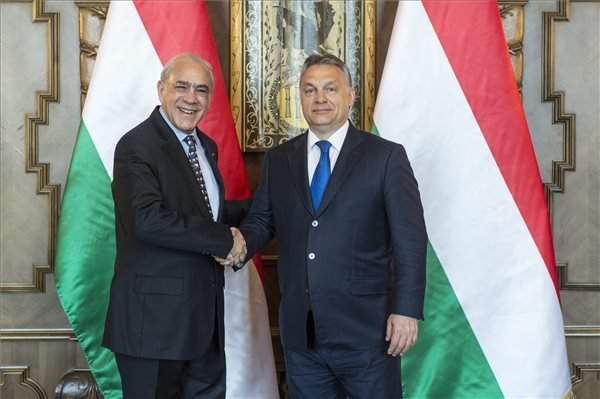 After their talks in Paris in April, Orbán and Gurria again reviewed cooperation between Hungary and the organisation and established that ties were extremely productive and fruitful, Bertalan Havasi said. Orbán said the OECD’s work has contributed to the success of Hungarian reforms. Gurria expressed appreciation for Hungary’s success and felt it was important that Hungary shared its expertise with other states, too, Havasi said.

Macroeconomic imbalances are being corrected, state debt as a percentage of GDP is falling, the country is running a current account surplus and financial vulnerabilities have been reduced, the OECD said in the 2016 Economic Survey of Hungary. The OECD noted, however, that non-performing loans still hamper bank lending, income levels are still well below those in more advanced economies and, as economic slack disappears, sustaining growth will require structural reforms to strengthen the business sector and upgrade skills.

Investment growth has started to pick up, supported by faster business capital accumulation as well as inward FDI and European Union funding, the OECD said. But business investment is still “held back frequently changing regulatory environment and entry barriers in network industries”, it added.

The OECD said that the education system has reacted slowly to labour market changes, leaving many graduates without needed skills. Training in public work schemes has not been effective enough in generating relevant labour market skills, it added.

Economy Minister Mihály Varga welcomed the OECD’s findings and said the report recognised the Hungarian economy’s improvement. It acknowledges the economic growth Hungary has achieved in recent years, the decreasing public debt and reduced vulnerability, the job growth along with the country’s current account surplus, the minister said.