Budapest, December 8 (MTI) – Parties of the opposition staged a demonstration in southeast Hungary’s Bekescsaba on Tuesday, to protest against the government’s auctioning off farmland belonging to the state-owned Mezohegyes stud farm. 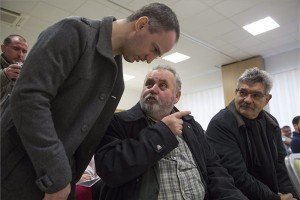 At a press conference ahead of the demonstration, Socialist vice chair Zoltan Gogos said it was against fundamental legal principles to sell properties which were currently on lease. He insisted that the justice minister had “no idea” how possible claims by the lease holders would be settled.

Gogos criticised plans to divide unsold plots into smaller ones, and argued that existing irrigation systems covering large areas, for example, could not be split up between the new owners.

Gogos also voiced doubt about government pledges to offer 400 new jobs when the stud farm reopens. He argued that “this many people could only be employed if they reaped by hand”.

Egyutt head Viktor Szigetvari said that plans to reestablish the stud farm on a mere 2,000 hectares remaining after the auctions are not feasible. He insisted that the project could fail within a year or two, and the local government could not save schools or healthcare services from collapsing without central subsidies.

Bence Tordai, board member of the Dialogue for Hungary (PM) party, said that the government was attempting to “destroy” the stud farm, which he called “irresponsible, illegitimate and immoral”.

Liberal executive Zoltan Bodnar insisted that the government’s measures ever since 2010 had been motivated by the “sole purpose” of redistributing national assets.

According to ruling Fidesz, the opposition stages protests “to prevent Hungarian farmers from obtaining land”.

In a statement, Fidesz’s deputies said that a part of the local land would be sold out, enabling local farmers to buy those plots, while the stud farm would be reestablished on 3,500-4,000 hectares as a model farm.

“The government will take responsibility for the local workforce of several hundred,” they added.