Orban who is on a three-day visit in Astana told a joint press conference with Massimov that they had decided to sign an aviation agreement with a view to launching direct flights between the two countries. He also emphasised the importance of cooperation in nuclear energy and engineering services.

He said Hungary would provide 200 scholarships to Kazakh students. 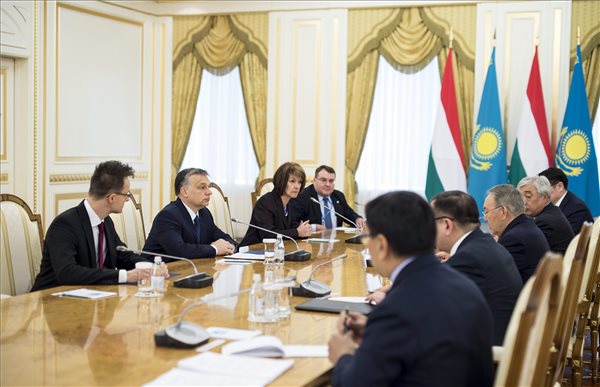 Massimov noted Hungary, as an EU member, and Kazakhstan, as an important country in the Asian region, would tighten strategic cooperation. He said the talks with Orban went well beyond the usual level of political dialogue and this had been true too of a meeting with President Nursultan Nazarbayev earlier in the day.

Orban said the government had decided that Hungary would join the Asian Development Bank. The prime minister accepted an invitation to an economic forum to be held in May as well as the 2017 Expo slated to be held in Kazakhstan. 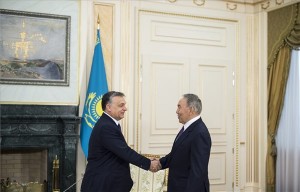 Orban said that in today’s world everyone was thinking about how to be successful in a fast-changing world. For Hungary, which lost a large part of its raw material resources and sources of energy for historical reasons it is not easy to find an answer to this question, he said, adding that it is important to create good relations with fast-developing parts of the world, and this is why a good relationship with Kazakhstan is essential.

He said that during a previous visit by his Kazakh counterpart to Budapest, a friendly relationship had developed between the two countries, and the Hungarian delegation gladly set foot in Kazakhstan together with six members of the government.

In the course of the day, Orban signed a memorandum of understanding on setting up a Hungarian-Kazakh strategic council; Foreign Minister Peter Szijjarto signed a preliminary agreement on the launch of a joint fund by KazAgro Holding and Eximbank; Justice Minister Laszlo Trocsanyi signed a criminal legal-aid agreement; and Economy Minister Mihaly Varga signed a cooperation agreement with his Kazakh counterpart on bilateral vocational training.