Over the past four years, Hungarian-Polish friendship has stood the test of time even in the toughest situations, Orban said in Warsaw, which marked his first visit abroad after the government’s recent election victory. He thanked Tusk for Poland’s support and reiterated that Central Europe will be en engine of growth in the European economy in the years ahead. This is also reflected in the latest EU forecasts, he said. Like the past four years, the Hungarian government’s foreign policy will focus on central Europe in the years ahead, Orban said. Hungary was able to make a major contribution to economic performance in central Europe last year and this will endure, he said.

Tusk noted that after his 2010 election victory, Orban made his first foreign visit abroad to Poland, and his visit this time underlined traditionally excellent Hungarian-Polish relations. This has also brought excellent results in regional policy, also in terms of the Visegrad Four cooperation of the Czech Republic, Hungary, Poland and Slovakia, he added. Tusk praised Hungary’s presidency of the V4 which is ending at the end of June. The V4 shows the best example of developing a common energy policy, he added. 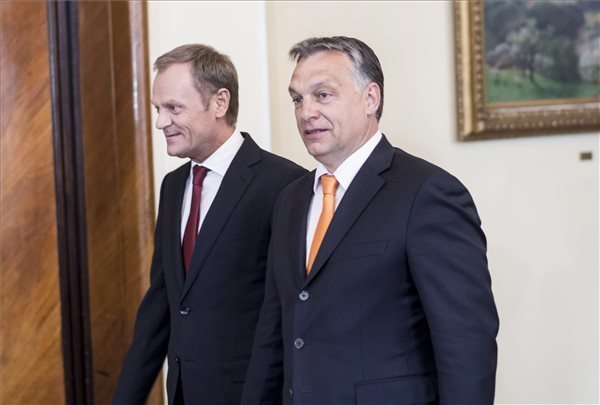 Orban told the press conference that he supported the energy union proposed by Tusk. He said central Europe was now in a better position from the point of view of energy independence but “our situation is not problem-free”. Energy policy in Hungary is not a matter of feelings or even a political question but “the most burning practical reality,” he said. Hungary either sustains the ratio of nuclear energy in its mix or must expand gas imports from Russia, he added. The aim of the Hungarian government is to reduce the significance of gas imports from Russia in the country’s energy mix. He noted that thanks to the Slovak-Hungarian gas interconnector gas of non-Russian origin would be arriving in Hungary from Jan. 1 next year.

In connection with the expansion of Hungary’s sole nuclear power station at Paks, Orban said that given the fact that the plant’s reactors are Russian it is not possible to employ other solutions.

Tusk, commenting on energy integration, said policies were not anti-Russian. Rather, energy independence was important in itself both on the level of EU member states and the bloc as a whole, he said. The monopoly must be broken, he added, to ensure that neither Russia nor any other country exerts pressure. He said Poland was neutral on the question of Russian involvement in Hungary’s nuclear industry. “This is not uncomfortable,” he said.

The crisis in Ukraine was also discussed by the two leaders. Orban said Europe faced a complicated year, while Tusk said that Hungarian and Polish views and challenges were similar in this respect, given that both countries had national minorities living in the troubled country. Like Hungary, Poland has an interest in seeing a peaceful solution to the crisis, Tusk said.