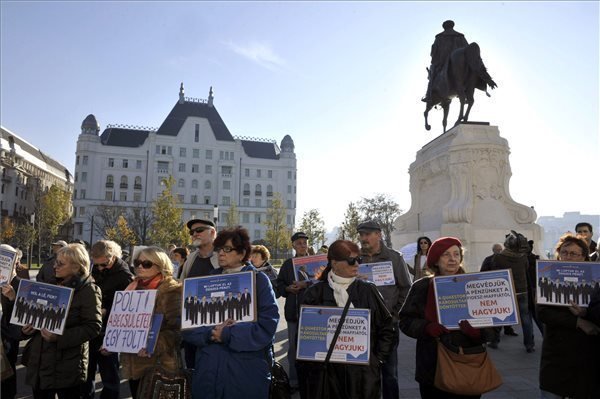 Budapest (MTI) – Around one hundred people, including several opposition politicians, demanded compensation for victims of the Quaestor brokerage scandal near parliament on Monday.

Deputy leader of the opposition Egyutt party Levente Papa said lawmakers will decide on Tuesday whether to guarantee cash compensation by the state in the law compensating investors of failed brokerage Quaestor, giving Hungarians who lost their savings greater legal security.

Quaestor victim Eva Himmer noted that the deadline stipulated by law for compensation had expired 90 days ago. She called on lawmakers “on behalf of 32,000 people” to clearly demonstrate in Tuesday’s vote their political intent to support Quaestor victims.

She added that nobody had received more than 30 percent compensation so far, which means full compensation was not offered even under the 6 million forints limit.

On March 10, the central bank partially suspended the operational permit of Quaestor Securities and appointed a commissioner after irregularities had been revealed. The day before, the Quaestor group’s issuer Quaestor Financial Hrurira filed for bankruptcy. A central bank investigation revealed that out of 210 billion forints corporate bonds issued by Quaestor Securities, some 150 billion forints were “fictitious”.

The investor protection fund Beva said in mid-October that 86.1 billion forints of compensation has been transferred to OTP which manages the payments and this will allow 31,078 clients, or 98 percent of all that demanded compensation, to be paid. Beva pays compensation up to 20,000 euros, or around 6 million forints. Parliament approved legislation for compensating sums larger than 20,000 euros but an appeal has been submitted to the Constitutional Court against certain details of this law.