Budapest, January 8 (MTI) – Civil groups and local Socialists organised a roadblock in protest of the new road toll regulations introduced at the start of the year.

The demonstrators blocked one lane on each side along a 1-km section on dual carriageway M86 near Szombathely, in western Hungary, for half an hour on Thursday morning.

Zoltan Peterfy, one of the organisers, told MTI that protesters disagree with the move to introduce a toll on a 15-kilometre section of a dual carriageway still unfinished. 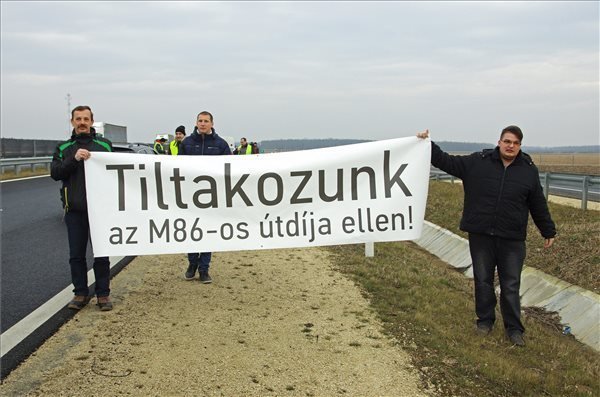 Andras Nemeny, a local Socialist official, said the new tolls would revert traffic to small towns and villages while the bypasses were built just for the purpose of lightening traffic there.

Under the scheme introduced on Jan. 1 a fee applies to use of the M0 ring around Budapest and links to motorways near major cities in Hungary. E-stickers for individual counties costing 5,000 forints, or 16 euros, a year can now be purchased as an alternative to stickers for various shorter periods and the all-country pass costing 42,980 forints a year.