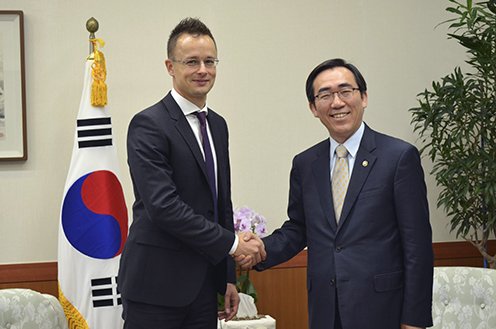 Following his talks, Mr Szijjártó stated that South Korean companies would soon launch health and car manufacturing schemes in Hungary, but added that the investors would not be named until the projects are officially announced.

South Korea is Hungary’s third largest partner in the East. The turnover of bilateral trade shrank by some 30% during the crisis, but Hungary has again increased its exports to South Korea by 14% during the first half of 2013, the State Secretary said.

South Korea’s investment in Hungary totals nearly two billion dollars, represented by 40 Korean companies, which employ 22,000 people. Besides encouraging further Korean investment, it is a priority for the Hungarian government to promote cooperation between small and medium-sized companies of the two countries, Mr Szijjártó said. An agreement, signed with the Korean deputy minister for industry, seeks to help medium-sized Korean businesses start operations in Hungary as suppliers to the larger firms, he added. Parties at the Seoul talks also agreed on closer cooperation in nuclear research and education, the Hungarian State Secretary stated.