A tortuous cave system is hiding under the streets and houses of Tapolca, a little town not far from Balaton. In the strictly protected cave, which was discovered more than 100 years ago, the visitors can make a unique boat trip on the lit, bluish water of the underground lake. A new visitor centre opened next to the cave in January, 2015, which makes this experience even more unforgettable.

Because of its special origin and unique formations, the cave was designated already in 1942 and placed under strict protection in 1982. The mixture of the cold karst water flowing here and the thermal water upsurging from the deep, dissolves limestone. Initially narrow passages, then smaller and larger niches were formed. During a very long time these widened into spacious chambers and passages.

Welovebalaton.hu writes that the turquoise water is around 18-20 °C, and is waist deep at most points, but there are also sections with only 10 cm of water. It eventually all flows into Lake Malom. The only living organism you can see in the cave is the common minnow. They say if you catch sight of this tiny fish you are granted one wish. 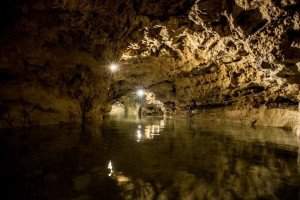 All the rooms and spaces of the new visitor centre display a mixture of captivating information and exciting installations, games and interactive surfaces, creating an easily digestible experience.

According to vilagjaromagazin.hu, the visitor centre almost had 150 thousand visitors last year. Zoltán Puskás, the director of the Balaton Upland National Park said that the visitor centre awaits people on 770 m2 with ten rooms. You get to know about karst treasures in a 3D cinema and there is also a playground for children. But other sights of the neighborhood also had a high number of visitors last year.

The director added that Csodabogyós Cave, which was discovered 25 years ago, was visited by 2800 people in the last year. The Bakony-Balaton Geopark, which was established in 2006, applied for the Global Geopark network membership in 2012. Thanks to this it received the “UNESCO Global Geopark” title last year.

The Balaton Upland National Park was established in 1997, and it lies on the north coast of Lake Balaton on 57 thousand hectares. 14 sights are waiting for curious visitors in the area. Make sure to visit them if you get the chance!