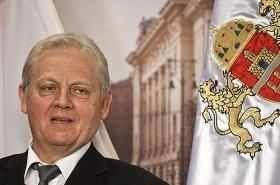 (MTI) – The ruling Fidesz party has nominated Budapest mayor Istvan Tarlos to run again for the post in the autumn municipal elections.

Lajos Kosa, Fidesz’s deputy chairman, told a press conference after a session of the party’s national board on Thursday that a key expectation of the mayor was his ability to cooperate on European Union financed developments.

He should also focus on running and developing the capital rather than waging a political war with the government, Kosa added, referring to Gabor Demszky, Tarlos’s liberal predecessor.

Fidesz and the allied Christian Democrats will run candidates in 1,167 towns and cities covering 85 percent of the country, Kosa said. The ruling parties will field 893 candidates and support 274 independent nominees; they will have 164 mayoral candidates in cities with more than 10,000 residents, and 1,003 candidates in smaller towns, he added.