The best thermal baths in Budapest

One of the must-have experiences when visiting Hungary’s capital, Budapest, is enjoying a soak in one of its famous thermal baths, some of which date back to the 16th century. The city, which sits on a fault line, sports an impressive number of such establishments, which are fed by no less than 120 hot springs. Here is our roundup of some of Budapest’s best thermal baths, all guaranteed to make you come alive.

A part of a hotel complex, the Gellért Thermal Bath houses one of the most photographed thermal baths in the capital. Its facilities, which initially functioned as a hospital, feature stained-glass windows, colorful mosaics, Roman-style columns, and imposing statues. The Art-Nouveau style building is home to thermal baths with water from Gellért hill’s mineral hot springs, saunas, plunge pools, as well as an outdoor swimming pool with artificial waves (these only come every 30 minutes so a bit of patience may be required). Some of the available services at the complex include lava stone massage, mud treatments, red wine rituals, and underwater massage.

The word on the street is said that people from all over the world visit the Lukács Thermal Bath complex, and for a good reason. First opened to the public in 1880s, the baths source water from thermal springs said to date back to the 12th century.

Some of the facilities on offer here include an infrared sauna, a stem cabin, and a Himalayan salt wall said to do wonders for respiratory issues. The complex also offers a variety of massage treatments, including medical massage and underwater massage. In fact, their services are so extensive that you even have the possibility of taking a rheumatology examination before or after your soak.

The Széchenyi Thermal Bath is the largest medicinal thermal bath complex in Europe. Located in a neo-Baroque palace that dates back to 1913, the baths feature 15 indoor pools and 3 outdoor pools large enough for laps, so don’t forget your swim cap. The spa’s water comes from two different hot springs, and is rich in calcium sulfate, magnesium and hydrogen carbonate (all great if you suffer from arthritis or low blood circulation). Aside from its baths, the complex also features steam rooms, saunas, and whirlpools for your aquatic pleasure. The baths’ temperature varies depending on where you choose to submerge yourself.

Why not try one of Széchenyi’s sparties, or spa parties, complete with DJs and laser shows. 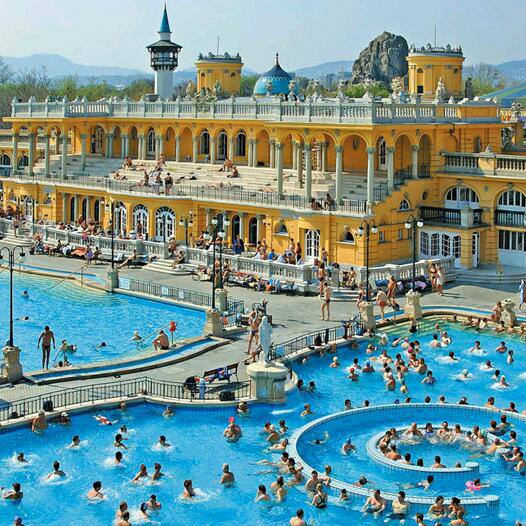 Built on the banks of the Danube River at the end of the 16th century, Rudas Baths features a main octagonal pool, which sits under a stunning dome. There is also a rooftop pool with a five-star view of the Danube.

The facility is open until 4 am each Friday and Saturday for those who like to take their soaks late into the night.