The Hungarian Pumi acknowledged in the USA

According to 24.hu, the indigenous Hungarian herding dog got into the oldest American breed register in the 190th place. After this decision, Pumis can compete at the most famous American dog-show, at the event Westminster Kennel Club.

The short, curly furred, floppy eared Pumi is very docile, alert and cobby. The dogs, weighing around 9-13 kilos, were used for the herding of cattle, sheep flocks and swine herds for centuries in Hungary. It’s the cousin of the Puli, which has been acknowledged by the American Kennel Club previously.

The president of the Hungarian Pumi Cub in America thinks that this dog is not for those “who sit around all day and watch the television”. Chris Levy has been working on the spread of the breed in the US for many years. He said that Pumis are doing great at skill tests, dog sports and even guard rabbits, chickens, goats and cats in America. 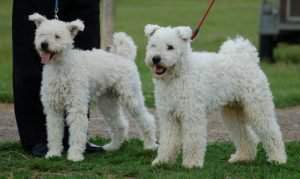 A breed needs to have at least 300 individuals and needs to live up to the requirements of AKC in order to get listed in its register. Two other breeds, the American Hairless Terrier and the Arabian Greyhound were registered in January, so they will also be present at the dog-show in February.

A few days ago the Hungaricum Committee decided to add the Hungarian herder and hunter dog breeds, thus the Pumi, as well, to the list of the Hungarian Valuables.