These are the greatest real estate development projects in Budapest in 2022! – PHOTOS

The series of successful real estate developments continue in the new year as well. Accordingly, we collected the most significant residential, office, hotel, commercial and urban development projects in Budapest that will boom in 2022.

There is no stop in the office market either where the price/m2 is approaching EUR 10,910 (~HUF 4 million) in the Hungarian capital. Despite the growing popularity of home office and hybrid working, several market players are still investing in the construction of new office buildings. Besides their compliance with energy and sustainability requirements, good location and excellent quality are also among the most important factors considered in these projects.

According to the latest data, the total modern office stock in Budapest is 3,955,600 m2.

Despite the predicted new waves of the pandemic, the hotel market in Budapest remains active from a development perspective. Accordingly, the series of new hotel openings realized last year – such as the B&B Hotel Budapest City, the Crowne Plaza Budapest, the IntercityHotel and the five-star Matild Palace – can continue with new accommodation projects in the upcoming year as well.

Still, the majority of hotel owners take deliberate actions due to the current situation. The previously planned new hotel openings might have some delays, due to which, they can actually welcome guests 1-2 years later than scheduled. According to an expert, this can mean that

only half of the 5,000 hotel rooms planned for this year can actually be constructed.

In 2022, the most important luxury hotel development projects in Budapest are the 5-star Tüköry Hotel with 152 guestrooms, the W Marriott Hotel with 165 guest-rooms, the Autograph Collection Vörösmarty Square and the reopening of Klotild Palota.

In the 3 and 4-star categories, we must mention the Quality Inn Hotel, the Jo&Joe Hybrid hotel and the Hampton by Hilton. Presumably, this year we can also visit those hotels whose inauguration was previously scheduled for 2021.

In 2021, Hungary could be proud of several remarkable shopping mall projects, including the opening of the 55,000 m2 Etele Plaza in the 11th district of Budapest, as well as the inauguration of the 11,000 m2 S-Park brand new retail unit in Kaposvár. In addition, the Indotek Group completed the renovation of Szeged Plaza, Kaposvár Plaza and Szolnok Plaza last autumn and will realize new reconstruction projects this year as well.

Namely, the GOBUDA Mall in Budapest’s 3rd district, Campona in South Buda and the 4,500-square-metre Corvin department store will get a new internal and external design in 2022.

Undoubtedly, the most complex projects are the construction of mini city centers in some Budapest districts. These large-scale projects are carried out for the development of a large area, including the residential and office areas, hotels, shops, parks, and the necessary infrastructure (transport, kindergarten, doctors’ offices, etc.), reports the Hungarian news portal Portfolio.

In addition, the final elements of the Corvin rehabilitation project in Budapest’s 8th district – carried out by Futureal Group – are also put into place. Presumably, the second phase of the Grand Corvin, the last residential building on the promenade, will also be completed soon. So far, the project has generated 22 hectares of land, 2,700 new apartments, 100,000 square metres of office space and 50,000 square metres of retail space, worth nearly EUR 1 billion.

In 2022, similar remarkable developments will start in Budapest’s 9th district and 14th district.

In the 9th district of the Hungarian capital, the new mini city centre named City Pearl will give place to 10 residential buildings, 4 office buildings, a hotel and a shopping mall.

In addition, Zugló City Center will also be renewed within the framework of the Bayer Construct’s project. The project will start in the first half of the year and is expected to last for 8 years. The entire area will boast 35,000 square metres of landscaped areas. The residential area will be 55,000 square metres, with roof gardens and green roofs. In total, 950 new apartments will be built. The commercial area of the project will be 84,000 m2. This will include a grocery store and a shopping street of 12,000 square metres. 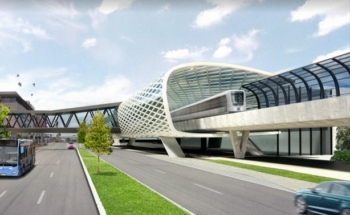