The brand-new development plans designed for the rust zone of the Hungarian capital’s 13th district is considered a unique project even in Europe. It includes a two-hectare public park and modern living areas.

Márkamonitor reports that an environmentally friendly modern city quarter with a unique microclimate will be built in the heart of Budapest’s 13th district. It will revivify the area and add functions that have never been present in the locality before.

“The concept of ‘rust zones’ was introduced by the Hungarian legislation in 2020, covering neglected area reserves. Rust zones, due to the expansion of the cities, are now wedged into the urban environment and are mainly unused due to previous pollution typically resulting from industrial activities,” CEE Legal Matters writes.

There have been a few smaller attempts to enliven similar rust zones in the Hungarian capital, such as last year’s major park development, the Széllkapu. It used to be a brown stain on Budapest’s map before, but fortunately, it has been revamped, and thus became a breezy, green, and exciting new public park with amazing elements of landscape architecture. Read also: All you need to know about Budapest’s newest park – PHOTOS

This brand-new concept will be built at the area of the old Láng Gépgyár (Láng machine factory), hence the new project’s name is Láng-negyed or Láng quarter in English.

According to the information of Márkamonitor, the developer has plans to renew a gross total area of 410,000 m2 including surface and underground developments. Based on the project scheme, residential buildings will be erected on an area of 136,000 m2 while another 133,000 m2 will be assigned for office buildings.

Additionally, a hotel with around 250 rooms is also included in the preliminary plans. It is projected to be a four-star establishment which means that it will be categorised as First Class or even potentially First Class Superior. Portfolio reported that the originally EUR 500 million budget was doubled to account for the increased price of building materials and the cost of environmentally friendly solutions for the buildings as well as the construction processes. This entails a total budget of EUR 1 billion, or approximately HUF 357 billion.

The concept design was conceived by Paulinyi & Partners which is also credited for several major architectural projects both in Hungary and abroad, including the recently opened Etele Plaza in Budapest and the Kanizsa Arena that was finished in mid-December.

Márkamonitor says that the construction will blend in well with the existing cityscape and will feature buildings of incrementally increasing heights reaching 65 metres at the north side of the area.

This will help make the area fit with its surroundings, and thus create a liveable environment with a large public park and many green areas. Építészfórum reports that the construction of the new district will be performed in six cycles between 2022 and 2031. In the first two cycles, they plan on finishing three residential and one 12-storey office building supplemented with a 3-storey underground garage.

The residential buildings will feature a ground floor with storefronts and 9-16 additional storeys with 1-3 levels of underground garages accordingly.

Between buildings, the designers wanted to create a “green oasis” which will also include rooftop gardens to achieve a 25% minimum green area. 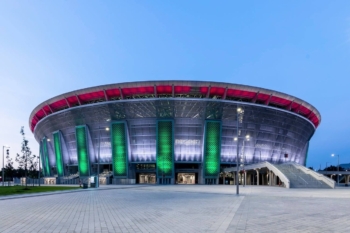