Ever been to a vintage shop? But to a really old one, not those fancy ones that are popular nowadays, where prices are higher than if you’d buy the wanted item as new. Now, imagine how that would feel like if you were walking among hundreds of shopkeepers, between piles of old and absolutely useless stuff, hiding priceless treasures. This is what the Ecseri flea market feels like. Take a journey with us to the market.

At the Ecseri Flea Market, time seems to have stopped completely. No, but really. You’ll find that hundreds of the items sold there were there for ages, now completely covered in dust and rust, even if they are not from the beginning of the previous century. Though there are some antiquities which are actually from days long gone. You can buy very unique things here, most of the items on sale you will find only here, you only have to make up your mind. What is it you’re looking for? Vintage clothes, old hats, gramophones, badges, paint rollers, pots? You’ll surely find it there.

The Ecseri Flea Market is one of Hungary’s biggest flea markets, and it is safe to say that it’s the biggest in Budapest. It was moving from place to place, acquiring several names, two of the most interesting and important ones being Tangó and Ecseri. The origins of the previous one are dubious: some people claim that it derives from the German word for flea market, Tandelmarkt, others say that it got the name from the music played on the old gramophones, and there are again others who say that the name comes from the tango-like slow  and slouching movement of the vendors. We can only guess. The other name, Ecseri, got stuck when the market resided on the Ecseri Road. 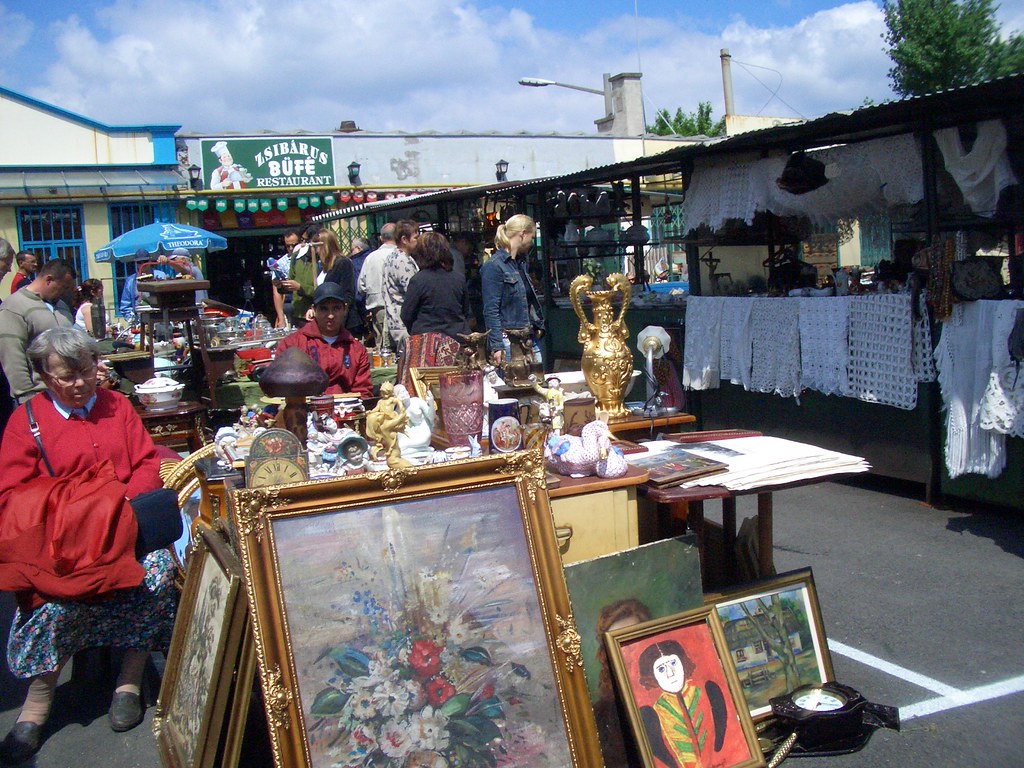 Even though the market is open all week, it’s best to go on Saturdays, especially early in the morning, as this is the busiest day. Between Monday and Friday, the market is open from 8 am until 4 pm, on Saturdays from 6 am until 1 pm and on Sundays from 9 am until 1 pm. It is also advised to go before the opening hours (if you can get in with the help of a nice vendor or an influential friend), or right when it opens, as it quite often happens that the vendors buy things up from each other and then they either don’t sell it, or they double its price, not willing to bargain.

Even though its name says Ecseri (translates to ‘from Ecser’), it is not actually in Ecser: it’s in Budapest. Now, you might have guessed that it’s on the road to Ecser, but no. It used to be there, so you’re halfway right, but not anymore: you will find the old and colourful market on Nagykőrösi út 156. It’s easiest to go there by car, but if you don’t own one, then just go to Boráros tér, from where you can take bus 54 or 55 directly to the market. Don’t forget to take off at Naszód utca stop, though.

Moving from place to place for 200 years

The Ecseri flea market had a bumpy history, moving from place to place since it first came into being in the early 1800’s. Back then, Budapest was much smaller than it is today: the lot where the Opera House stands today used to be the outskirts of the city. This is where the Ecseri market started off. However, in the 1870’s, when the city development began, it was moved to today’s II János Pál tér, where it presided for 20 years, before moving to Teleki tér, next to the Kerepesi cemetery. The next destination was the Ecseri road when a grocery market was opened at Teleki tér and the flea market was forced out of the district. Finally, in 1964, the market was moved to the Nagykőrösi road, but it saw a gradually and heavy decline since then, being renovated only 50 years later, in 2014: a market hall was built, replacing the stalls.

Initially, Jewish vendors were selling household utensils that were needed, but were too expensive as new for the poorer people, but as the market and the interest in the items on sale grew, vendors realised that they can make good money on rare antiquities and retro household appliances (which of course can no longer be operated, they are only good as decoration).

Make no mistake, these vendors are really smart, they have good selling tactics, and they don’t even regard it as a flea market, rather as a mall for antiquities (creative, huh?). The vendors usually focus on specific things, for example, some of them sell only clothes, others paintings and other decorations, some vendors occupy themselves with tools. It’s quite colourful and wonderful in its strangeness. Some of the sellers come here only once or twice, but there are serious vendors here, whom you can trust for their professionalism and honesty. These vendors are usually from the city, who own antiquity shops and want to expand their clientele (and also to buy things up from others, but that is a must there, if you want to survive as a vendor).

Here’s a protip for you: if you are not in the mood for long bargaining or wandering, then check out the vendors who sell their merchandise from their car trunks in the parking lots close-by. 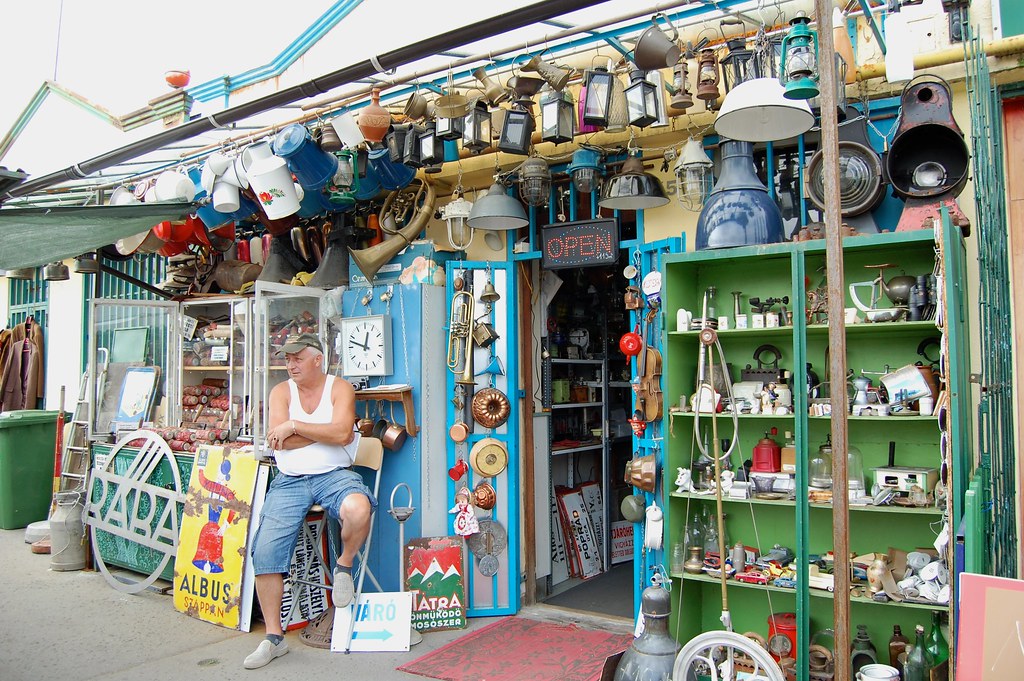 What’s on sale, then?

What is peculiar about the Ecseri Flea Market is that a lot of the items you’ll find there were there probably five years ago as well, since the vendors try to sell them for irrationally high prices. Sometimes the antiquities you find are really worth a goldmine, but in most cases, they are not even worth a penny, yet the nice and loud vendor tries to sell it to you for hundreds of euros. Still, if you’re good at bargaining (more about that later), then maybe you’ll take home a couple cute candle holders or letter weights for a couple bucks. Or, if you have the money, you’ll be lucky enough to buy an extremely rare art treasure. If you never try, you’ll never know… 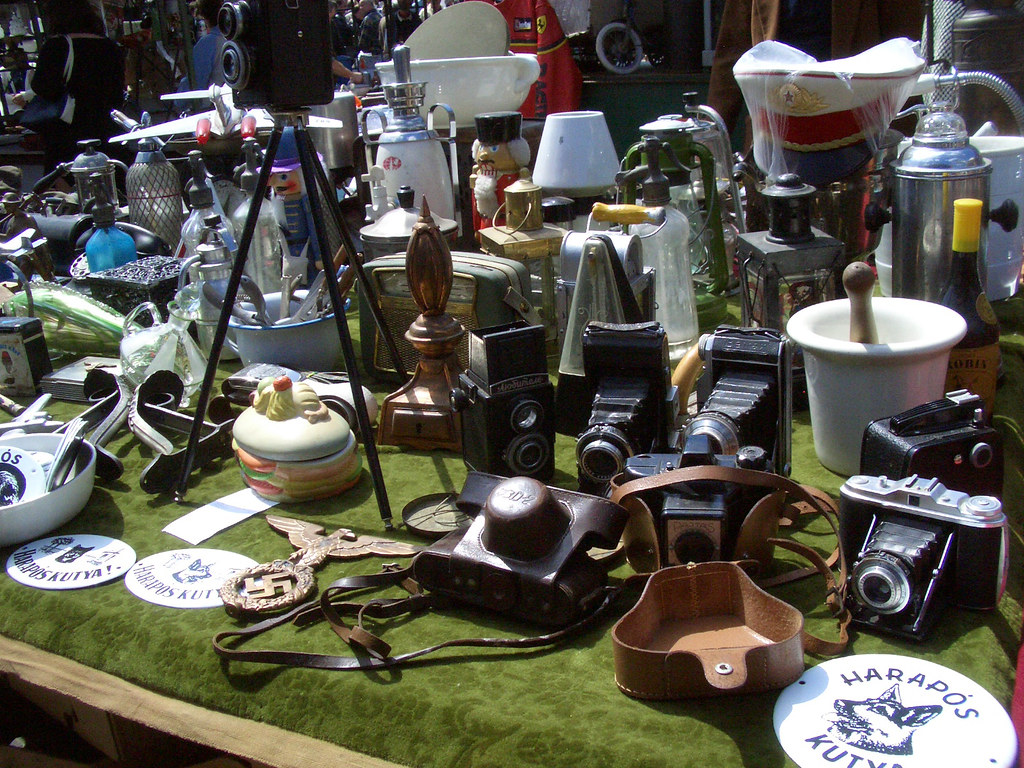 This is the most difficult part of shopping at a flea market, right after finding the exact item you were looking for. Since a lot of foreigners come here because of the exciting nature of the loud and friendly vendors, prices are going higher and higher. If you are looking for price tags, you’re looking in vain: there aren’t any, the vendors measure you up and then tell you for how much they are willing to part with their merchandise. Of course, if they detect that you are not sure about yourself, then the price will be quite high.

This is where bargaining comes into the picture. It is quintessential at flea markets, and this is what keeps the life in the Ecseri Market as well, but you have to be really good at bargaining, otherwise, you will not convince the vendor. This is how you should go at it: first, be nice to the lady/mister and after you see that they are becoming truly friendly (not just a mock friendliness, but a real one), say some words that are of foreign origins: most of the vendors here are simple people (no offence meant here) and they do not meet fancy words, this will make you come off as a very serious person who knows what they’re doing. After that, you have to end niceties and start complimenting the items that others are offering, comparing them to the one that you’re trying to buy, saying that it is actually quite bad. If you see the vendor still trying to sell you the item, then tell them that you’re willing to rid them of that ‘rusty, old not-good-for-anything’ teapot for a couple bucks. Good luck!