Washington, DC, June 12 (MTI) – The collection of online donations has started for the construction of a museum in Washington, DC, commemorating the victims of communism around the world and the Hungarian government has already offered to contribute 1 million dollars, the executive director of the Victims of Communism Memorial Foundation said on Wednesday local time.

Marion Smith told a press conference that the launch of buildthemuseum.org marks the 25th anniversary of the collapse of the Iron Curtain and the 20th anniversary of setting up the foundation.

Representatives of 18 countries, including Hungary, and civil and diaspora organisations laid wreaths at the Victims of Communism Memorial modeled after the papier mache “Goddess of Democracy” statue erected by student protestors on Tiananmen Square in 1989. 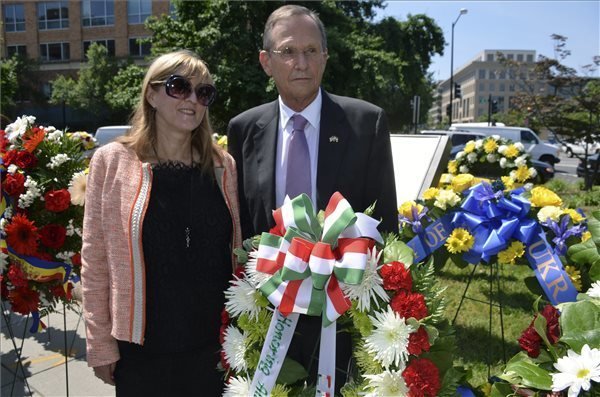 Maria Schmidt, director of the Budapest House of Terror Museum, said time has come to follow up the erection of the statue with the building of a museum. Hungary has taken the role of the initiator in this project and contributed 1 million dollars to it, she added, expressing hope that other countries will also join.

Historian Lee Edwards, chairman of the foundation, told MTI that most people were not aware that 100 million lives had been lost in the communist dictatorships of the 20th century and people were still dying in such dictatorial regimes. He expressed hope that the cornerstone of the museum can be placed in 2017, the centenary of the Bolshevik Revolution.