18th of June – The birthday of Miklós Horthy

Miklós Horthy de Nagybánya (18 June, 1868, Kenderes – 9 February, 1957, Estoril, Portugal) was the naval officer of the Austrian-Hungarian Navy, the adjutant of Franz Joseph between 1909 and 1914, and the last lieutenant-general of the fleet as a rear admiral. The king promoted him to vice-admiral after the world war. He consolidated state power after the fall of the proletarian dictatorship following WWI. He was the Regent of the Kingdom of Hungary between 1920 and 1944. He died in his emigration in Portugal and was re-buried in 1993 in Kenderes.

Turul.info writes that Miklós Horthy was born as the fifth child (out of nine) of a mid-landowner family. His father lived an active public life; he was a Calvinist diocesan guardian and the member of the upper house. His mother led the household and took part in the managing of the farm. The parents paid a lot of attention to the upbringing and education of their children.

Miklós chose the military career following his brothers and the wish of his father. He applied to the Imperial and Royal Nautical Academy of Fiume in 1882. Being an excellent sportsman, he gained great prestige. His outstanding sport achievements (in sailing, running, fencing, cycling, tennis and horse riding), talent for dancing, appealing manners and knowledge of foreign languages made him a warmly welcomed man in companies.

Emperor and King Franz Joseph promoted Miklós Horthy lieutenant-commander to be his adjutant in 1909. He learned a lot by the side of the emperor, which he profited from later as a regent. After the outbreak of WWI he applied for war service, which he was assigned to.

After WWI he returned to his land in Kenderes and lived through the chaotic conditions of the country there. He obeyed the calling word of the nation and arrived in Szeged on the 6th of June, 1919 and organised the National Army, with which he marched into Budapest on the 16th of November, 1919. The capital city welcomed him with utter enthusiasm. 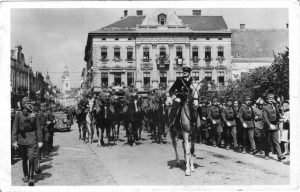 The National Assembly elected Vice-Admiral Miklós Horthy as the Regent of the Kingdom of Hungary on the 1st of March, 1920. He took on the lead and the moral, economic, politic, military recovery of a country that lost a war, and lived through red terror, white terror and the Czech-Romanian intervention. During the time of the Treaty of Trianon, Hungary was at the verge of economic fall. With hard work he managed to restore the prestige of Hungary and successfully consolidated the country. He gave back the national self-esteem of Hungarians and never gave up on reuniting the Hungarian nation.

Under his lead, Hungary started to fall into line with the level of development of the western states in a relatively short time (after 6-8 years). Agriculture, industry and trade boomed. The Hungarian pengő became one of the strongest currencies in Europe and kept its stability until the end of WWII.

Then came WWII, which Hungary couldn’t keep clear of. Horthy and the Hungarian government were on a waiting viewpoint but, in the end at the end, our country was only a small figure on the politic-military chess table of great powers.

No matter how much he tried, it seemed like it was impossible for him to have a word in what was going on in Hungary after the German occupation. His call-off try failed and Gestapo kidnapped Horthy’s son on the 15th of October, 1944 and delivered him to a concentration camp. The regent had no other choice than to renounce on the 16th of October.

Miklós Horthy loved his country and, even in his emigration in Portugal, he tried to do whatever he could for his country. The news of the revolution of 1956 uplifted him first, but he crashed down physically and spiritually after the squelch of the war of independence. He fell into total apathy, and even though doctors claimed that he had no organ failure, he passed away soon.

He chose the cemetery of Lisbon himself and said: “I want to lie here until I’m taken back home to a free Hungary”. His wish was fulfilled on the 4th of September, 1993.

“The sea is deep and endless…But my love for my homeland is even deeper, and my longing, which draws me back home to Hungarian land and the circle of the Hungarian nation, is even more endless.”