20 places in Budapest to slow down and relax

More and more people are looking for places to slow down their daily, weekly tempo. This is why these kind of “slow-down” places are quite popular nowadays in Budapest as well. Szeretlekmagyarorszag.hu collected 20 places where you can relax, read, write, or study peacefully.

The “slow-down movement” started in the 1980s in Italy and it aims to slow down the tempo of urban life so that city dwellers can get to know their direct environment and local values, thus owning and protecting their city. The “Slow Budapest” project started in 2012 and it tries to open up our eyes so that we all realize how bad constant rushing and stress are, and how badly overdriven people are. They want to help you slow down.

This is one of Budapest’s oldest and steepest streets. You can only go slowly and carefully on this bumpy, steep and quite weedy street in some places. Walking up the street and down thereafter completely clears out your mind, as the only thing you can concentrate on is not falling over the cobblestones.

This is a social place not too far from the Gül Baba Street and the busy Margit Boulevard. You can sit there from early afternoon until 11 pm. Besides concerts and flea markets they also have weekly bio Thursdays, when they serve vegetarian, organic food. It is the island of peacefulness. 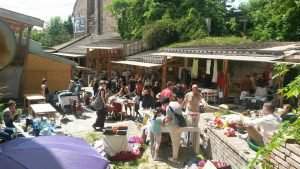 The street loved by so many was already mentioned on Slow Budapest’s map in 2014. You can find it in the first district, more exactly, under the side of the Castle District that overlooks the Danube. It turns its back on the bustling capital, streets and places for entertainment. It’s like a firm galley. 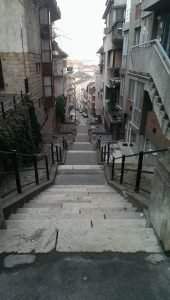 You don’t have to rush anything at these places. The Édeni Vegán (Paradise Vegan) filled a huge gap in the market when it was opened ten years ago. It’s on the ground level of a listed building, which even has a hotel inside, with a lovevely inner yard. This is the best place to calmly eat your vegan food. Isolabella is a unique place. It is stuck in the 1980s. The place is perfect for a peaceful and deep conversation. 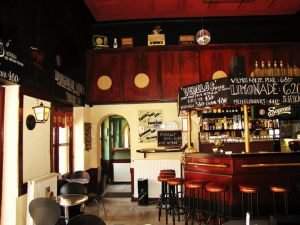 A park was constructed around the National Museum in the 1860s, which was a brilliant idea. This is probably the most famous “island of peace” in the capital.

The Károlyi Garden is one of the oldest, consciously designed gardens of Budapest in an unabridged location, which already existed in the 17th century. It became the property of the Károlyi family in 1768. It was almost closed in the 20th century when the family got into financial problems and sold the garden with the palace to build new estates on the property. This was when the state interfered positively and bought the property in 1929 to re-open it as a public park in 1932. There were even concerts held in the park in the last century.
The Csendes (Peaceful) has a suggestive name. You’ll find your fantastic inner and outer peace there whether you go for a coffee, a cocoa or a beer.
The Fekete (Black) opened a few years ago and its name refers to the main theme of the place, which is coffee. The baristas know everything about quality coffee so you can safely ask them anything. 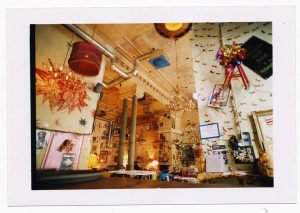 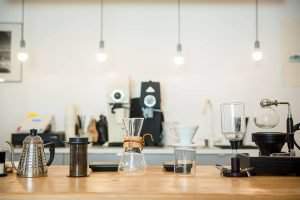 The place found on Andrássy Avenue is known for using bio products for making your breakfast or lunch. They try to get everything through fair trade, meaning that they buy products at normal prices, not for artificially depressed prices, thus disembowelling producers. 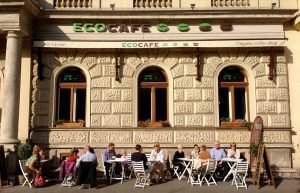 This is the special sub-office of MagNet Bank. It is the restaurant of their community house on Andrássy Avenue, with a very calming terrace, especially compared to the traffic of the street.

It is the descendant of Gondozó Garden with a lovely yard, field balm, plants and fresh air. Even though the neighbourhood is not too dependable, going there with your friends is a fun experience as you find yourselves in a completely different dimension of the city.

Its interior design might seem a bit daring at first, however, the mixture of the mainstream Rom folklore motives and the East European socialist baroque style is not scary at all.

The Worker and Officer Settlement is a hidden treasure in Óbuda and was built between 1911 and 1914 according to the plans of Lóránd Almási Balogh and Kálmán Reichl. The factory manager’s house was in the middle, surrounded by the other dwelling buildings. They all counted quite up-to-date as they had separate bathrooms, toilets and laundry rooms. The park surrounding the buildings was looked after by a gardener.
The Gaphisoft Park was constructed in the beginning of the 2000s. It’s unbelievable that you can relax among/near/behind office buildings while listening to the noises of nature, trees and birds.

It was almost left as a separate area after the union of Pest, Buda and Óbuda, in 1873. Even though it survived fire, flood, population swaps, the demolition disguised as city-planning was able to destroy the crooked, antique streets and cottages of Tabán. They were planning a significant construction in the 1930s but it was cancelled due to the war, which then destroyed what was left of Tabán. Today only a few buildings and Ernő Zórád’s works remind us of the onetime Tabán. Despite all this, it is still a perfect spot for picnics or reading in the beauty of nature.

18) The park of offices at Dürer Garden

This is another dimension gate: the contrast is the biggest if you arrive there on feet from Keleti Railway Station. You’ll find there a big garden with a buffet and a romantic feel to them. 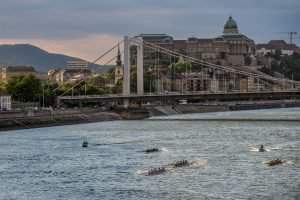 20) The Garden of Philosophers

The unique composition can be found on Gellért Mountain, near the Gruber water tank. It was given to the city in 1997 by the will of artist Nándor Wagner. The statues depict the great religion founders and thinkers of world history. You can go there in any season as it is always an exciting location.