Hungary is a beloved travel destination. The small Central-European country is full of treasures waiting to be explored. The most well-known ones are of course the capital Budapest and Lake Balaton, the “Hungarian sea”. However, few people are familiar with the hidden, not so firmly marketed sights of Hungary. Magyarorszagom.hu assembled a list of 7 unusual places in Hungary which are not well-known, even though these are just as interesting and unique as the main tourist attractions.

The floating village of Bokod

This place is wonderful. The floating village of Bokod is a collection of tiny houses (mainly used by the locals for fishing in the summer) built on wooden poles. The buildings sit directly above the water. The lake is technically a cooling pod for a power plant nearby, so its water never freezes. The lake is bordered by two villages: Bokod (West) and Oroszlány (East). This beautiful place is only 50 miles West of Budapest.

The medieval castle of Csesznek was built in the 13th century (around 1263) by Jakab Cseszneky, the sword bearer of King Béla IV. Unfortunately, in 1594 the castle was occupied by Turkish troops. The Hungarians were able to recapture the castle only in 1598. From the castle, there is an amazing view of Kőmosó canyon.

The Benedictine Monastery of Pannonhalma

In 996, Prince Géza settled monks from Bohemia on the Sacred Mount of Pannonia, and thus founded the monastery. This monastery is one of the oldest treasures of Northern Hungary, and it is also the second largest monastery in the world.

Lake Szelid is a lake in Bács-Kiskun county, Hungary. It is an unusual salt lake formed from an old branch of the Danube. The lake, with a maximum width of 200 m and length of 4 km is only three meters deep on average. The lake warms quickly in the summer, sometimes reaching 28 degrees Celsius. The lake has therapeutic effects, and it is useful for neurological, hormonal or rheumatic problems. They also use the lake for relaxation and fishing. There is a campsite nearby and a sandy beach, as well.

Oh, did I mention that there is a Hungarian remake of Despacito which is about Lake Szelidi? In Hungarian, Szelidi-tó is the perfect rhyme for despacito.

The Megyer-hegy Tarn is located above the city of Sárospatak in Borsod-Abaúj-Zemplén county. It was selected as the most beautiful natural treasure of Hungary in 1997. If you have ever visited this place, you can understand why. It is a spectacularly beautiful natural formation. The area used to be a millstone mine which closed in 1907. Later on, rainwater filled the pit. 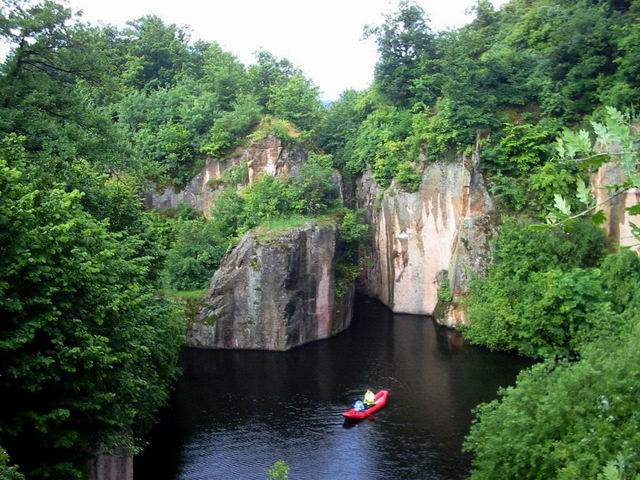 Hajmáskér is situated halfway between Veszprém and Várpalota; the settlement has 3,000 inhabitants. A military settlement was established at Hajmáskér at the end of the 19th century by Franz Joseph I. Under his orders, the stately building was constructed as a barracks for artillery units, and it became Hungary’s largest artillery range. During World War I, it grew so large that it held a POW prison and even had its own currency. The range was used until the Soviet troops left Hungary. Today, one of the largest barracks of the Austro-Hungarian monarchy’s military is only an abandoned ruin.

The thermal baths of Budapest are world-famous. Few people know that thermal water is not only for bathing but it is for drinking too. Rudas Ivócsarnok (refreshment room) is a hidden place in Budapest, located near Elisabeth Bridge. Visitors can try all of Budapest’s thermal waters. Sometimes, the drinking of thermal water is prescribed as a treatment for certain health issues.