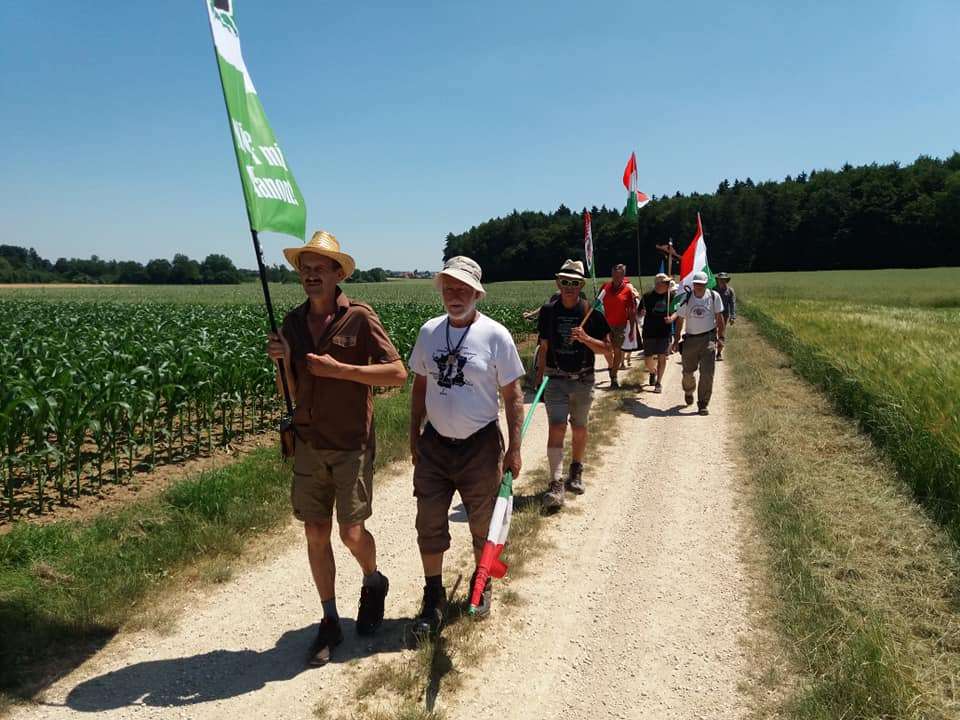 In order to draw the European public’s attention to the injustice that the Treaty of Trianon imposed on Hungary, seven people set out on a 50-day pilgrimage from Budapest to Versailles.

Alfahír writes that a group of seven has set out on a 50-day pilgrimage from Budapest to Versailles at the beginning of June. Their goal is to raise awareness about the injustice Hungary had to suffer as a result of the Treaty of Trianon.

This is not the first pilgrimage that these dedicated people take part in as a group: they visited Csíksomlyó and Medjugorje previously.

Their pilgrimage from Budapest to Versailles lasts 50 days across 1600 kilometres.

The group set out on the 4th of June from Heroes’ Square, and they are to arrive on the 22nd of July at Versailles, to the Grand Trianon, where the Hungarian delegate was forced to sign the Treaty of Trianon in 1920. Alfahír writes that this was the most brutal treaty of the many that symbolised the end of the First Great War. The 22nd is also the anniversary of the Siege of Belgrade.

Even though only seven of them will take the whole journey, numerous people join them for shorter or longer periods, among them elderly people over the age of 70.

They usually walk 32 kilometres a day, but their pilgrimage was not easy in June due to the long-lasting, record-breaking heatwave.

Their route takes them from Budapest through Upper Hungary to Austria, Germany and France. The pilgrims are currently in France, and they still have 230 kilometres to Versailles (on the 15th of July).

The leader of the Trianon pilgrimage, József Lendvai, recalled their journey to Alfahír:

“We seized each and every opportunity during our walk to tell those interested the purpose of our pilgrimage, why the Treaty of Trianon and the 1947 Paris Peace Treaties are unjust and unacceptable”

In Austria and Germany, the pilgrims met with indifference and rejection, but in France, people welcomed them with interest and kind, encouraging words.

They arrived at a small town on Sunday, where the national holiday celebrations were taking place. The locals and the mayor received them warmly.

“In return, we sang the Marseilles as a parting gesture. This brought tears to the mayor’s eyes” – said Lendvai.

On the previous day, the vicar of the Toul Cathedral blessed the pilgrims with the following words:

“Our Lord! We pray to you, who are the trustee of all human dignity. I ask you to help this small group on their journey. They took the burdens of this pilgrimage for a day’s dignity and truth. We ask you to make their truthful goal fruitful.”

According to plans, the pilgrims will arrive in Paris on Sunday, the 21st, where the World Federation of Hungarians will do a press conference with the aim of raising awareness of the Federation’s “Truth for Europe” petition.