The Airbnb of weddings created by two Hungarian women

Letting strangers come to your wedding, one of the most intimate days of your life, might seem weird at first. But in India, where weddings look like huge and expensive festivals, the opening up of your wedding to tourists, who are even willing to pay for it, seems much more logical. According to index.hu, this is what two Hungarian women realised when they started Join My Wedding, the Airbnb of the wedding industry.

Most people love to go to weddings. Imagine a couple with a completely different cultural background from ours, whose wedding wouldn’t only be a party or a feast, but also a cultural experience. If you fancy the idea, then you can have the chance to travel to faraway weddings and get an insight into local traditions by favour of a Hungarian startup.

The idea of Join My Wedding came to the minds of two young Hungarian women, Orsolya Parkányi and Márta Matécsa in 2015. Orsolya had been living in Australia for some time when she met Márta. Orsolya complained about how she missed all of her friends’ wedding due to living abroad, while Márta talked about an Indian wedding she’d been to and how amazing that experience was.

Then came the idea to visit other couples’ weddings as tourists for some money. This wasn’t only a flush, they immediately started brainstorming and working out a business model that would be suitable for both sides. And this is how Join My Wedding was born.

They launched their site in the April of 2016, which works just like Airbnb; the only difference is that you register your wedding instead of your apartment. You can check out the profile of each wedding before choosing and paying for the most attractive one.

The reason why they choose India as their starting point is that a traditional wedding is a real jollity and spectacle there, through which western tourists can get into the depth of things. 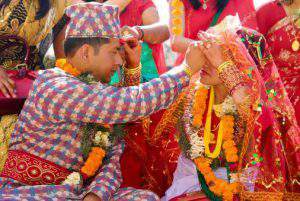 There are usually 20-30 spots for a wedding of 1000 guests and participation costs around 100 dollars/day which basically equals the price of other cultural programmes in India. In exchange, you can take part in all wedding programmes, eat as much as you want, and even get accommodation in case of a longer wedding.

The media played a great role in the spreading of the initiation as several foreign papers have reported on the company, not to mention that BBC went to shoot at one of the weddings.

The main target group of Join My Wedding is basically any western tourist who desires an original programme and is interested in other cultures, traditions. “We count with the population of the first world countries as guests, because our experiences show that people in developing countries are more likely to open up their weddings to strangers. However, we don’t seclude ourselves from the idea of Hungarian weddings appearing in the repertoire in the future. We want to focus on India first, and expend later.”

Besides the geographic expending of Join My Wedding, the founders have further plans regarding weddings. One is a wedding crowdfunding application that would replace the money physically given at weddings. This way relatives and friends could contribute to the new, married life even before the event.