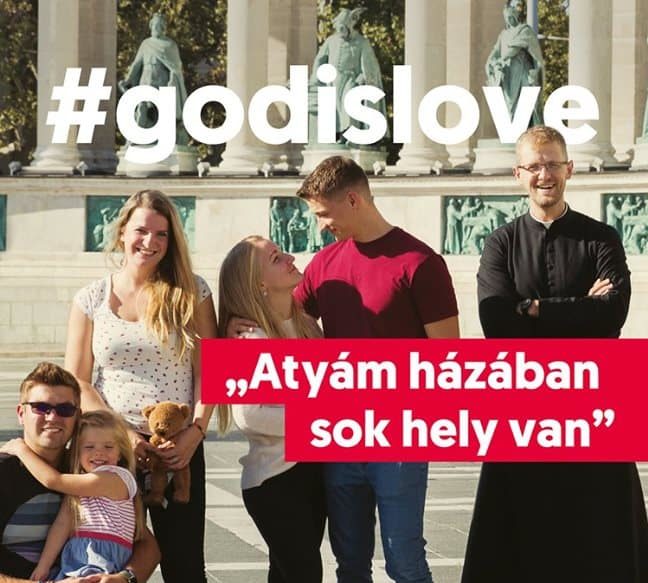 #Godislove posters have been put up in 13 places in Budapest as a reply to Coca-Cola’s #LoveisLove campaign promoting the acceptance of same-sex relationships. The new posters feature a Roman Catholic priest and an excerpt from the Bible: “My Father’s house has many rooms” (John 14:1-27).

On the posters, there is a very popular vlogger priest, Father Andrew, who has his own video show on YouTube and is present on Instagram as well, hvg reported.

The main message of the new campaign is that instead of being outraged by things they do not like, a Christian should believe in Jesus Christ because, in the Bible, it is clearly stated that “God is love” (Jn 4,16b).

The campaign – even backed by the Conference of Christian Entrepreneurs – is a game, too. András Hodász asks every Christian to

take a photo with the posters,

upload them to social media with a #GODISLOVE hashtag and write why they like to be Christians and what it means to them that they are associated with the living God.

The Father encouraged everybody in his video to testify their belief in God on social media and thus help evangelise the world.

Interestingly, András Hodász was in a show in Hungarian public media in January, in which the main topic was how homosexuals “can be healed.” In September, he was part of a similar discussion on M5 where he was talking about Joseph Nicolosi’s “Shame and Attachment Loss.” Nicolosi was an American clinical psychologist who advocated and practised reparative therapy,

a controversial practice that he claimed could help people overcome or mitigate their homosexual desires and replace them with heterosexual ones.

However, since the American Psychological Association did not find any evidence on the efficiency of such therapies, many states banned reparative therapies.

As we reported before, the Hungarian Authority for Consumer Protection said that Coca-Cola damaged the moral development of children by putting up posters of two men hugging and two women drinking from the same bottle of coke, and they

Coca-Cola said then that the main goal of their original campaign was to promote the values they have been standing up for a long time, like the equality of different people. They said that we are all equal, regardless of our nationality, religion, sex, age, hobbies, language, or ethnic background.

As we reported before, Coca-Cola posters had been put up in Hungarian subways

promoting the acceptance of same-sex relationships and saying #LOVEISLOVE.

This caused homophobic outrage on the internet. BKV (Transportation Company of Budapest) put out a statement in which they refused to take a stand, saying they are not responsible for the commercials and are in the process of changing their ad organiser anyway. Coca-Cola’s #LOVEISLOVE campaign features a lesbian and a gay couple on the posters.