Bosch to invest EUR 43.8m at Hungary base

An investment project costing over fourteen billion forints (EUR 43 million) is commencing at Bosch’s plant in Miskolc, Robert Bosch Energy and Body Systems Ltd; amongst others, production lines and testing equipment for next generation products will be realised within the framework of the project, which will be completed in 2021.
At the press conference to announce the investment, Minister of Foreign Affairs and Trade Péter Szijjártó told reporters:

“The Government is supporting the 14.1 billion forint investment with 2.65 billion forints (8.23 million euros) in non-returnable funding”.

The investment will enable the production and modernisation of new generations of existing products – engine cooling fans and motors for electric bicycles – as well as of new products such as camshaft gearboxes.

The Minister also spoke about the fact that last year the Hungarian economy succeeded in prospering amidst extreme global economic conditions, 2018 saw the dawn of a totally new era, the economy’s Hungarian participants stood their ground, and the Hungarian economy produced a “uniquely” good, excellent performance and a record year.

“This also required the reorganisation of our investment promotion activities”, he said. “The international economy not only regards Hungary as an assembly location, but also a location for research and development; large foreign companies continue to have confidence in Hungary, in its political and economic stability, and in the expertise of its workers”, he added.

“Companies have never before invested as much money as they did last year; 98 major investments were announced by enterprises with a total value of 1380 billion forints (EUR 4.3bn), towards which the Government contributed with 135 billion forints in non-returnable cash funding”, Mr. Szijjártó said.

With relation to Bosch, the Minister said it is one of the world’s largest companies, and is continuously expanding its Hungarian activities and making regular new investments. The company is also one of the determining factors of Hungarian-German economic cooperation, in which it plays a key role. Mr. Szijjártó highlighted that Germany is Hungary’s most important partner: 27 percent of Hungarian exports are bound for Germany, German enterprises are the number one investors in Hungary, and 29 percent of working capital comes from Germany. 28 out of the 98 major investments announced last year are German.

Bosch has been present in Hungary for over 120 years, since 1898. The companies nine Hungarian subsidiaries, which employ a total of some 15 thousand people, realised over 244 billion forints (EUR 74.6 million) in turnover in 2017. The total turnover generated by all of the Group’s plants exceeded 78 billion euros in 2017. 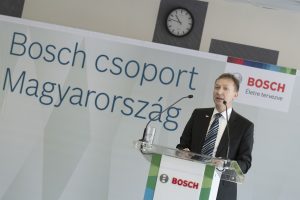 Financial Director of Robert Bosch Energy and Body Systems Limited Frank-Stephan Kupfer spoke about the fact that thanks to the latest investment, the strategic importance and outstanding position of the automotive industry plant in Miskolc will increase further in global comparison. This company was founded in 2003, manufactures automotive industry parts and electric motors, and employs over 2.5 thousand people, he told the press.

The press conference to announce the investment occurred at the same time as the 200 millionth product rolled off the production line in Miskolc. This was an iBooster electromechanical brake booster, which makes the motors of hybrid and electric vehicles more efficient, while shorter brake distances and the electronic steering system assure greater safety.