Earlier in the day, two state secretaries from the development ministry, Gabor Czepek and Laszlo Taso, met representatives of the taxi drivers for talks.

Zsolt Gelencser, one of the demonstration’s organisers, told a press conference after the meeting that an agreement was reached with the government representatives on starting talks next week concerning the law on taxi services and how the operations of Uber may comply with rules governing taxis.

He thanked members of the public for their patience during the protest and he also thanked the police for their help. He added that the demonstration had met its goal.

Another organiser, Csaba Czifery, said government representatives at the talks declared they were on the side of taxi drivers. He said the taxi drivers will be represented by a delegation at next week’s talks and they expect that at least four to six weeks will be necessary to introduce effective rules. 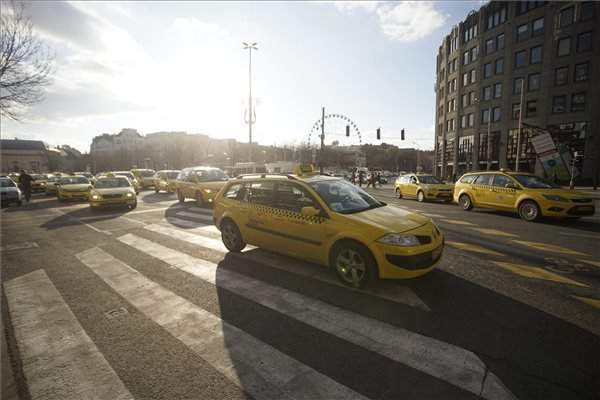 The development ministry said the taxi drivers’ representatives promised at the talks that the demonstration would end on Thursday afternoon. The government representatives said they are “on the side of the taxi drivers who obey laws and pay taxes”. The ministry added in a statement it had been agreed that taxi services can only be provided according to the rules of a government decree and under equal conditions for all participants. Talks will continue next week and the ministry said it awaits proposals from taxi representatives.

The demonstration in the junction of Bajcsy-Zsinlinszky Road, Jozsef Attila Road and Andrassy Avenue entered into its fourth day on Thursday morning, with police securing the area and controlling traffic. Cars were allowed to use one lane in each direction.

The government yesterday said it would heed to calls by taxi drivers for a level playing field and talks would be started soon on fairer regulations for the long term. It also said banning Uber would not be ruled out if the company did not stick to the rules.

Government office chief Janos Lazar told a regular press briefing on Thursday that the government needs to help taxi drivers because it is a regulated market, and if the state regulates a market, it should involve protecting it. A common denominator needs to be found with the taxi drivers on how things should be regulated, he added. The government wants everybody in Hungary to respect the law and pay tax, plus it wants to ensure the high quality and transparency of taxi services, Lazar said.

Prime Minister Viktor Orban asked people at the cabinet meeting whether the government members were using Uber. None said they did but the majority of younger people working for the government are Uber users, Lazar added.