Carnival programmes for the weekend

It doesn’t seem like winter is ready to leave us, but you can compensate with the following carnival programmes that travleo.hu collected. If you’re tired of winter, chase it away with the Busós of Mohács or join the carnival celebrations of Szentendre or Budapest. But if you love the winter landscape, opt for an enjoyable hike, excursion, instead.

Drive away winter in Mohács

One of the greatest and most well-known Hungarian traditions, the Busó Festival is held at the end of February. UNESCO added the celebration to the World Heritage list in 2009, so it will probably have more visitors this year than ever. The razzle-dazzle starts on the 23rd of February with at least 1300 Busós in masquerade. The programmes of the traditional event include carnival procession, folksong competition, dance workshops and performance, balls, and the coffin burning ritual on shrove Tuesday.

This is the first time that Szentendre organises a carnival celebration, but they want to start a tradition. It is held between the 24th and 26th of February at the Main Square, which gives place to the gastronomy market of food heaven. There’s going to be diverse programmes at the weekend. For instance, kids will probably adore the magic show of the Capital Circus of Budapest’s performers. The masquerade-torch procession starts from the square at 6pm on Saturday and ends with a street ball. The carnival ends with the concert of Balkan Fanatic on Sunday.

This is another new event just like the previous one. Doughnuts and other street food will be the focus of the Buda carnival. Get ready for sweetness, doughnut-making courses, family programmes and the general carnival feeling. The festival will be held between the 24th and 26th of February in the street between Allée Mall and the Market of Fehérvéri Road.

Carnival at the Castle Garden Bazaar

Join the carnival gaieties of the beautiful Castle Garden Bazaar from 2.30pm on the 26th of February. Dance at the rock’n’roll concert and enjoy the street food options, chimney cakes, charity doughnut making, fire juggler show, masquerade, photo booths and the costume selection.

If you want to spend the upcoming weekend with something more adventurous, then celebrate the 75th anniversary of the Tapolca Lake Cave’s protected surface area with a geo-hike. The excursion starts on the 26th of February from Gyulakeszi. After overcoming the 6 kilometre long path, you can conquer the Csobánc Mountain, which offers a breath-taking panorama of the monadnocks, all year around. Moreover, you can try the popular boat trip in the Lake Cave. 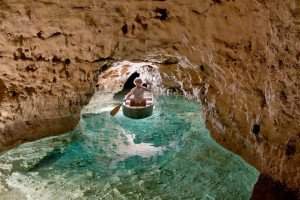 You could also join a 24 kilometre long hike in the Pilis Mountains on the 25th of February, which aims to reach the Kisrigó Restaurant of Pilisszentlászló. Furthermore, if you prefer something less tiring, but still want to be surrounded by nature, take a ride on the forest train of Szilvásvárad and visit the Szalajka Valley. You can choose from four rides at the weekend of February and March.