Budapest, May 29 (MTI) – Migration and the identity of central and eastern European nations are the focal themes of a conference which began in Budapest on Monday. 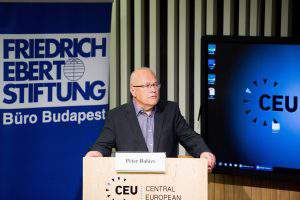 Addressing the event organised by the Central European University’s Centre for Neighbourhood Studies and the Friedrich-Ebert-Stifting, former foreign minister Péter Balázs said that at present most migrants come from other continents rather than neighbouring countries, representing other cultures and religions, speaking other languages and “being other than us”. Finding a “common identity requires solidarity”, he said.

From the government’s point of view, migration can be divided into three phases: rescue, identification and integration, each requiring a different approach, Balázs said.

Rescuing migrants requires the greatest possible solidarity which is blind to national or religious factors, he said. As refugees flee from war they need food, safe haven and medical supplies, he said, adding that governments should assist and encourage civil organisations in their efforts to help refugees.

Identifying the arrivals is the first step towards granting them refugee status. In this phase there is a need for “Schengen-wide solidarity”, he said.

In the third phase, Balázs said, government solidarity should focus on their own populations, taking stock of their integration capacities. In that phase, refugees should also display solidarity towards the recipient countries by adopting their values and learning their language, he said.

Timo Rinke of the German foundation said that the migrant crisis can only be resolved through a consensus concerning European solutions.

According to the invitation to the conference, “incoming refugees have created strong negative reactions across Europe, in both destination and transit countries. Such reactions were instrumentalised by some political actors in order to instil fear, and a rhetoric of ‘us’ versus ‘them’ is increasingly popular. One consequence of such political processes was the emphasis placed on the political community, and its re-conceptualisation along mostly ethnic and/or religious lines.”

The conference, organisers said, aims to find out how communities are being re-imagined in countries that receive refugees or that are transit nations.