When choosing a travel destination bridges might not be among the most important aspects; however, the online travel portal Jetsetter believes that bridges are just as important sights as anything else and writer Chelsea Stuart even put together a list of the most beautiful bridges in the world. It’s a very pleasant surprise that one of Budapest’s symbols, the Chain Bridge was chosen as the 8th most beautiful bridge in the world. The list includes simultaneously breath-takingly beautiful and historic bridges, like the Brooklyn Bridge, Pont du Gard or Langkawi Sky Bridge. ‘Oh the bridge it shines’ as Elton John would sing.

This is how the article describes the Chain Bridge: “Gracefully crossing the Danube, Chain Bridge’s cast iron design was the first to connect Buda (on the west bank) and Pest (on the east) before their unification in 1873. Once a marvel of modern engineering, the bridge has had quite the storied history. Nearly 100-years into its existence, it was blown up by German soldiers during the Siege of Budapest, at the end of WWII. Since the event left nothing to the site but the towers, it had to be entirely rebuilt (a process that was completed in 1949).” 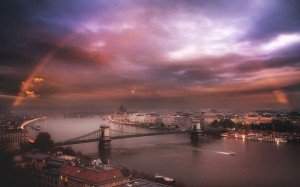