The opposition Democratic Coalition (DK) is calling for efforts to stop Ukrainians from abusing Hungary’s pension system, a party lawmaker said on Saturday, describing the scheme as a “Ukrainian pension business”.

Gergely Arató said that since 2010, Ukrainian citizens had been setting up fictitious addresses in Szabolcs-Szatmár-Bereg County in north-east Hungary.

They have been abusing a former Hungarian-Soviet agreement under which they could gain eligibility for Hungarian pension, which is significantly more than Ukrainian pension, with the help of fake documents and citing working years in the former Soviet Union and Ukraine, he added.

Opposition having no chance to win the 2022 elections?

In addition to picking up pensions ranging 200,000-300,000 forints (EUR 556-834) monthly, they have been using health care services in Hungary despite the fact that they had never worked in Hungary, he said.

The government in power in 2009 started preparing the cancellation of the agreement but it was never completed by the governments of Prime Minister Viktor Orbán, he added.

Arató said it was “shocking” that a government would be “handing out money to Ukrainian pensioners out of political interest” while Hungarian pensioners are only “bribed with campaign-like bonuses before the elections”.

After the 2022 election, a democratic government under DK prime ministerial candidate Klára Dobrev would end the abuse of the pension system, he said. 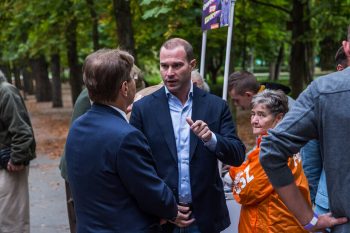