Losses in tax revenue resulting from the government’s decision to cut payroll taxes next year could be partially offset by an uptick in economic growth, Economy Minister Mihály Varga said on Thursday. 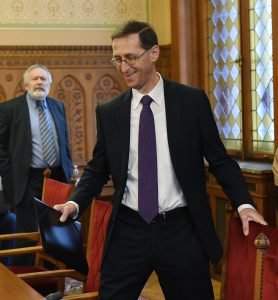 The government expects a GDP growth rate of more than 3 percent in 2017, Varga told parliament’s economic committee in his annual ministerial hearing.

He said the macroeconomic effects of next year’s minimum wage increases would bring in an additional 180 billion forints (EUR 573m) in tax revenue, while the payroll tax cuts would translate to 410 billion forints in losses for the state budget.

The government made a commitment to reduce burdens on economic players, Varga said, adding that the combined effect of the two measures would leave “a significant amount of resources” in the economy.

Varga said the government trusted that the projected uptake in economic growth would ensure the tax revenues needed to balance the budget.

Answering a question, Varga underlined that there were no plans to amend the 2017 budget, adding that modifications could be made later in the year based on the economic indicators of the first three months.

Varga said the government’s deficit target for this year of below 3 percent of GDP was achievable, adding that Hungary registered a deficit of 0.7 percent, calculated according to EU accounting rules, over the first nine months of the year.

The perpetrator acquired hundreds of millions of HUF in assets, diamonds, cash, and…

Barbara Palvin, one of the most famous Hungarian models, has conquered almost the…