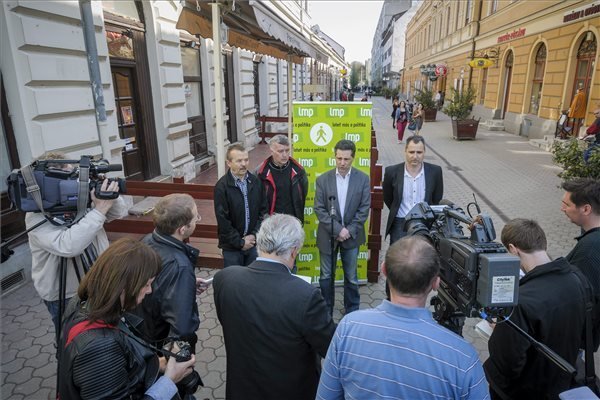 Budapest, March 28 (MTI) – Votes cast for the Socialists and the Fidesz party in the past 20 years have been wasted, the co-chair of the opposition LMP party said on Friday on the campaign trail in eastern Hungary.

Inclusion policies of both major parties, when in government, had failed, Andras Schiffer told reporters at a local LMP outdoor stand in Debrecen.

“Those governments wanted to turn Hungary into an ‘assembly plant,’ but the LMP does not want to do this.”

He said his party’s economic policy is for supporting local economies, small and medium size businesses, R+D, innovation and higher education that strengthen Hungarian economy with a high rate of added value, he said.

He criticised Prime Minister Viktor Orban for offering as an incentive “cheap Hungarian labour and less stringent rules in protecting workers” during his recent visit to Saudi Arabia.

“Hungary needs a new direction, it should be developed into a country where politics is not dictated by oligarchs, where the prime minister does not take pride in offering cheap labour and where workers are not left exposed.”

Hungary must be a country where there is high added value and enough reason to stay, said Schiffer.