According to index.hu, the American ESPN media corporation’s football website, the espnfc.com, asked a French artist, Florian Nicolle, to design a personalized poster to all national teams participating at the 2016 UEFA European Championship. Some of them turned out quite interesting, but we should be satisfied with the Hungarian poster.

The Hungarian national football team is represented by our most popular player, Balázs Dzsudzsák, but what’s even more important is the slogan that they made up for our team: ‘More than magic’ can be read on the graphics. This invokes the Hungarian technique that is close to being an adage in Hungary, and definitely refers to the time of Puskás and the Golden Team, when the team was referred to as “magic magyars” abroad, especially in England. 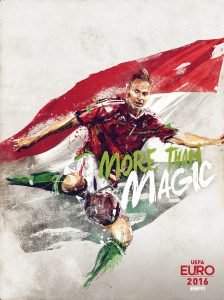 This is a particularly flattering compliment, especially, if we take a look at the slogans other teams got. Some of them turned out a tad bit meaningless:

Iceland – More than an island

Turkey – More than a star

Poland – More than a striker

Concerning the other countries in our group (except for Iceland who we’ve just mentioned), Group F, the posters Austria and Portugal got are not bad either. Austria is ‘More than potential’, while Portugal is ‘More than iconic’.

Budapest economy European Union Fidesz Government History Hungary migration Ministry of Foreign Affairs tourism Viktor Orbán
For the first time in the history of Hungary, the first-ever Pride will be held as…
Chinese-owned Starters E-Components Generators Automotive Hungary (SEGA) laid the…
Changes are coming to Budapest’s most famous district. Bars and nightclubs of the…

In an interview to The Hollywood Reporter, Csaba Káel, the commissioner for promoting…
We and our partners use technologies, such as cookies, and collect browsing data to give you the best online experience and to personalise the content and advertising shown to you. I accept
Privacy & Cookies Policy