FINA.org – “It’s amazing what has been done here in just eight months!” The FINA President Dr. Julio C. Maglione couldn’t hide his astonishment when visiting this afternoon the new Aquatics Complex, the main venue of the 2017 FINA World Championships in Budapest (HUN). Started in May 2015, the new facility will comprise two 50 m pools (one for competition and one for warm-up purposes) and one diving pool. When visiting the place, three days before the celebration of the FINA Aquatics Gala – Soirée des Etoiles in the Magyar capital, the FINA delegation praised the state of the construction, which will be ready by March 2017.

According to fina.org, “It is a great facility, and it will definitively be an outstanding legacy for this beautiful city of Budapest. Hungary has already a solid tradition in Aquatics, so this new complex will bring an additional added-value to the passion this country has for our disciplines”, considered the FINA President, accompanied by FINA Executive Director Cornel Marculescu, and by FINA Vice-President and Chairman of the 2017 Organising Committee Tamas Gyarfas.

According to the plans for the Championships, the Swimming, Diving and Synchronised Swimming could take place in this venue, while the Water Polo tournaments would be played in the iconic site of Margaret Island. The Open Water Swimming races will take place in Lake Balaton.

FINA’s offical website said, before visiting this new Aquatics Complex (the main structure is already done and the place for the three swimming pools is visible), situated on the shore of the Danube River, the FINA delegation had a meeting with Hungary’s Prime Minister Viktor Orban. “We received the full commitment of the Hungarian government concerning the organisation of these Championships. It will be the greatest sport event ever staged in Hungary”, underlined Dr. Maglione, in front of the future competition pool. 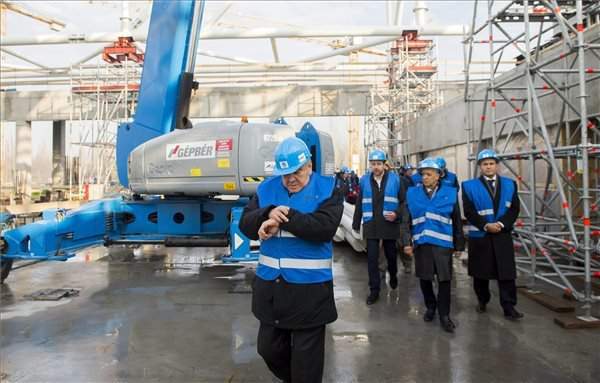