Have a ride with Lili and Lali. From now on cars of the major national sponsor of the 17th FINA World Championships, Főtaxi will be decorated with the mascots of the World Championships. Dávid and Evelyn Verrasztó, key members of the Hungarian swimmer team have contributed to decorating one of the cars.

Another milestone is to remind us of the fact that the 17th FINA World Championships (taking place from 14 July to 30 July) are approaching. The cars of Főtaxi promoting the event have appeared in the streets of the Hungarian capital. The new look of the company’s vehicle fleet has debuted.

Taxis are decorated with the image elements of the World Champs, they promote the event with the two mascots, Lili and Lali in the focus.

„Bp2017 World Championship Organising and Managing Nonprofit LLC is pleased to have partnership with a reliable company of the most extensive history in the field. It is great help for us. Many thanks to Főtaxi for contributing to the successful conduct of the World Championships as the major national sponsor” – said Miklós Borsa, spokesman of Bp2017 LLC.

„The staff of Főtaxi will definitely be busy regarding that we expect about 350 000 visitors for the World Champs, one quarter of them will be foreigners. Similarly to the case of ticket purchase we recommend using official platforms, so in the case of travelling it is therefore suggested that fans, future sport enthusiast visitors use the services of Főtaxi. The bonnet of yellow taxis is decorated with the promotional sticker of the World Championships so these cars are easily recognizable. In addition, unlike other vehicles these promotional cars have access to World Championships venues due to the sponsorship.” 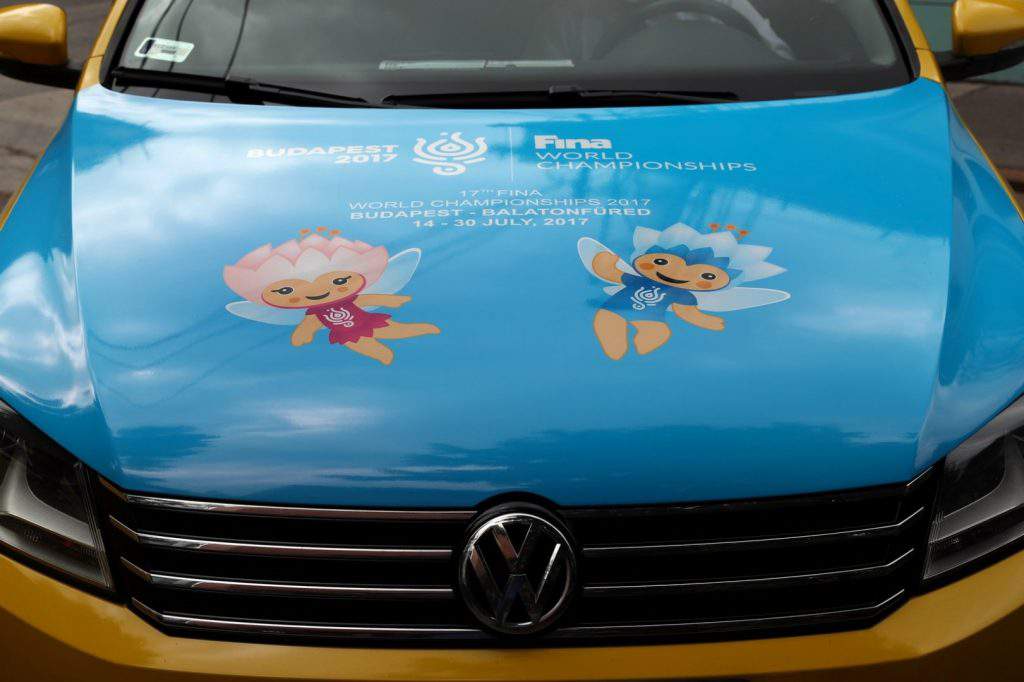 Besides offering services to tourists and fans taxis will play an important role during the 17th Masters World Championships, as well. The Organising Committee expects 12-15 thousand athletes attending the event and since there will be no dedicated bus and public transport services for athletes in this case, the use of taxis will increase significantly.

FINA – Budapest2017: Tickets are now available! Click here to get your own ticket!

‘It was a great honour for us to become the official transport service provider and major sponsor of the FINA World Championships to be held in Budapest this summer. We believe that as the largest taxi service provider in Hungary we can guarantee safe and smooth transportation of passengers of large numbers thanks to our 1100 cars. At the same time, this extended fleet offers a great opportunity to promote FINA in Hungary prior to the Championships – said András Vízy, spokesman of Főtaxi.