Budapest, January 21 (MTI) – The government will issue two new decrees on February 3 detailing the regulations of the new home purchase subsidy programme, the government office chief said at a regular press briefing on Thursday. Also the government has asked the development ministry to draft a study on the possibility of demolishing Budapest’s Déli railway station and converting it into a park. The government’s plans to restructure and eliminate more than 70 state-owned institutions and bodies financed from the central budget in a bid to cut red tape, government office chief János Lázár said.  The government is ready to help troubled dairy producers, many of whom may leave the industry due to low milk prices. 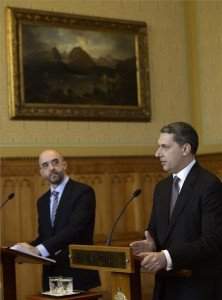 The government has asked the development ministry to draft a study on the possibility of demolishing Budapest’s Déli railway station and converting it into a park, government chief János Lázár said on Thursday.

Commenting on another transport-related subject, he told his regular press briefing that once the state takes over the suburban railways HÉV network, it will be modernised and new lines could be built.

Talks will begin between the Prime Minister’s Office and the various ministries within the next few days on how some institutions can be merged into ministries, how outsourcing can be eliminated and the system operated more cheaply and simply, Lázár told his regular weekly press briefing on Thursday. Some 50,000 people are staffed at these institutions, he said.

The government will only make a few exceptions, but the restructuring should apply to all state offices. The bodies that the government will certainly not close down are the police, the military, the tax office NAV and the schools agency Klik. It will also keep intact the State Health Supply Centre and the Social Chief Directorate, he added.

Those most certainly affected include the National Health Insurance Fund OEP and the pension management institute. The government will make its final decisions on February 10, he said.

Government to issue new decrees on home subsidies in February

János Lázár said one of the decrees will rule on the purchase of existing homes while the other will cover subsidies for new-builds.

Lázár said the government will scrap the rule that home-buying loan of 10 million forints (EUR 31,855) is only granted if the real estate costs less than 30 million forints. The government is also prepared to support loft conversions in cities and the construction of new homesteads in the countryside, he said.

Public workers will also be eligible to apply for a subsidy to buy existing homes and for home renovations, Lázár said.

He said the government will hold talks with construction industry players to lay out the guarantees that will enforce the new construction regulations now that the rules for obtaining home-building permits have been loosened.

Museums could contain many objects of contested ownership

Lázár referred to an announcement made on Wednesday that a painting by Pieter Bruegel the Elder could be returned from the Museum of Fine Arts to descendants of the original owners. The minister said that the picture, an object under national protection, cannot be exported from the country, and added that the owners were ready negotiate conditions under which the painting could stay in the museum.

The claim for “The Sermon of Saint John the Baptist”, was submitted by Veronika Batthyany-Strattmann and Adam Batthyany in August last year.

Lázár told a regular government press briefing that the government is looking at ways it can compensate dairy producers for the low prices.

He confirmed that the government will launch a new round of farmland auctions to sell a minimum of 150,000 hectares of land, with prices and legal conditions unchanged. The new round of auctions will be held between March 1-15, with the list of plots being put up for sale to be completed by next week, he said.