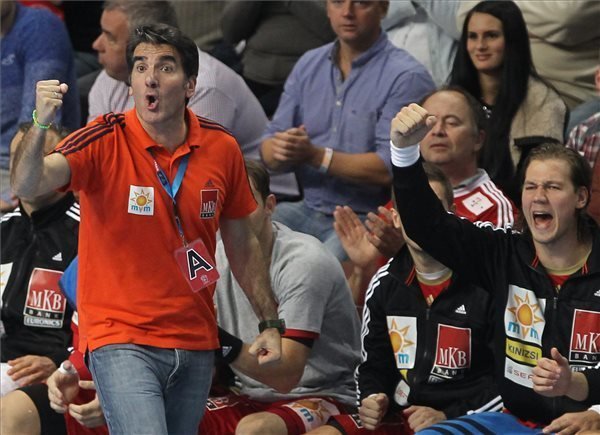 The Catalan side left their Hungarian opponents behind in front of a 20,000-strong crowd, which rose to its feet to honour the 2015 champions 30 seconds before the final whistle.

The EHF said, Barca are the second club to win the trophy for the second time in Cologne, after THW Kiel (2010 and 2012), extending the run of victories in this competition for Spanish and German clubs, which stretches back to 2004.

Barcelona had lost two finals, in 2010 and 2013, before reclaiming the trophy.

According to eurohandball.com, Siarhei Rutenka became the fifth player in history to win the EHF Champions league six times. His teammate Kiril Lazarov secured his first trophy, but missed out on the golden ball awarded to the competition’s top scorer of the season.

That honour went to Veszprem’s Momir Ilic, who scored five goals to finish on 114 goals, eight ahead of Lazarov’s final tally.

Icelander Gudjon Valur Sigurdsson ended his “Cologne-curse” by winning the Champions League trophy for the first time at the fifth attempt, with a fourth different club.

“I often left this arena very disappointed. Therefore I am very very happy about this victory. It is unbelievable to win this title,” Sigurdsson commented.

The eurohandball.com said, Nikola Karabatic was Barcelona’s top scorer with six goals, like Sigurdsson, and not only won his third EHF Champions League with a third different club (Montpellier 2003, Kiel 2007), but, like Cedric Sorhaindo now holds all four major titles – Champions League, World Championship, EHF EURO and Olympic Games – at the same time.

On the other hand, Veszprem captain Laszlo Nagy missed out on his third title after winning the trophy twice with Barcelona – despite his eight goals in the final. And Veszprem could not take the opportunity to become the first Hungarian club to hold Europe’ top trophy.

On eurohandball.com website Veszprems coach Carlos Ortega commented on the match: “They were better than us. We could never stop in any moment Nikola Karabatic. They were much better than our attack. A few of our players maybe they were too tired after the match of yesterday. But our season is amazing, we did only loose three matches over the whole season.”