The Hungarian daredevils, the Hussars

Hungary’s history is quite an adventurous, though sometimes sad one, characterised by difficulties forced upon it by stronger nations. Still, Hungarians are not the kind of people who would let such things go by. This is where the famous Hungarian fighters, the Hussars come into the picture.

The hussars were the light cavalry dedicated to defending the country against the Ottoman invasion. It was the just and honest Hungarian ruler, King Matthias Corvinus who created this form of cavalry. Hussars were first incorporated into the Black Army of Hungary, and by 1490, theirs was the standard form of cavalry.

After the death of Corvinus, the Hungarian hussars were hired as mercenaries by Habsburg emperors as to help in the on-going fights against the Russian- and Ottoman empires.

Later on, there were instances where Transylvanian hussars were fighting against hussars hired by the Habsburgs or by someone else.

Most Hungarian units were active during Rákóczi’s War of Independence in the early 1700s (which made them iconic) and during the 1848-1849 Hungarian Revolution.

Hussars were considered to be the adventurers of the army, they were seen as reckless, hard-drinking, swearing and womanising soldiers at times. Throughout the 18th century, hussars often treated the local civilians poorly by looting and pillaging,  at least according to some sources.

The origin of the name is unclear, as some argue that the word ‘hussar’ is derived from the Serbia-Croatian word ‘husa’, that refers to looting and robbing, but then the question is raised as to why would a Hungarian noble family pick such a name connected to criminals for their most successful and best unit of cavalry? Another argument is that there was one hussar per 20 serfs. The number 20 in Hungarian is ‘húsz’, pronounced very similarly to ‘hussar’.

There is, however, the third explanation, according to which there is a word similar to hussar in an Ujgur language of Hun origins, that means ‘soldier’.

Hungarian hussars were copied all across Europe, not just hired as mercenaries. Their fighting tactics were most envied, as they proved to be successful in almost all battles, seemingly effortlessly. In reality, there was a lot of effort involved, but the hussars knew what they were fighting for and were – fortunately – extremely brave, almost fearless warriors. Their tricks and tactics involved mostly harassing enemy skirmishers, overrunning artillery positions, pursuing fleeing troops and vanishing from the battleground in a second.

From 1700 on, the hussars’ military uniform was inspired by contemporary Hungarian fashion. This meant that they wore a short jacket (dolman), which was later replaced by a medium-length ‘attila’ jacket. The jacket was decorated with a heavy horizontal braid across the breast and yellow braided knots on the sleeves. Hungarian hussars wore a pelisse too, which was a short-waisted over-jacket. Their trousers were coloured with yellow braided knots at the front. The accessories consisted of a busby, high riding boots, and an ornate pouch that was hung from the belt.

Hussars sported a long moustache, with no beard, this being their trademark feature. They had long hair, with two braids in front of the ears. 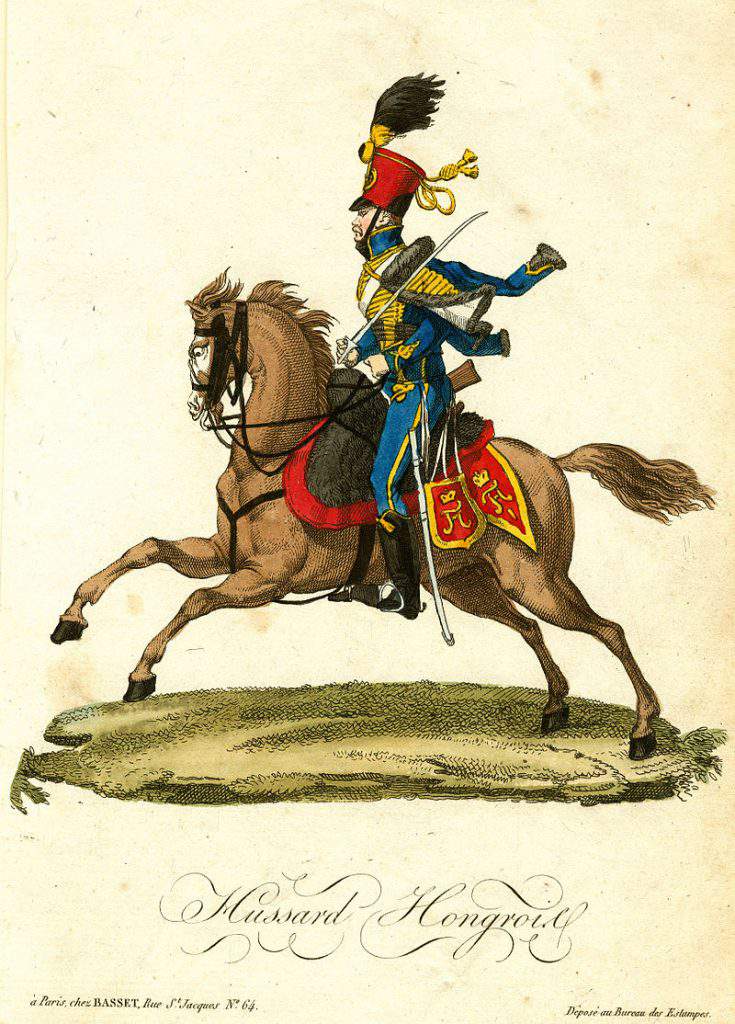 Not just in Hungary

France originally recruited fighters from Hungary and Germany, later turning only to German-speaking regions, finally setting up their own hussar cavalries.

Still, at the front of the French hussars, there was a Hungarian lieutenant, László Bercsényi.

The hussar situation is interesting in Romania too. Here the cavalry was not meant to be hussars, but their pre-1915 uniforms were of the classic hussar type. The reason behind the diplomatic avoidance of having ‘hussars’ was that the Austro-Hungarian Monarchy was a rival of Romania.

In Europe, hussars still existed at the brink of the First World War, representing the regular light cavalry. As opposed to the previous custom of hiring mercenaries, each country decided to recruit men from home ground to train them as hussars. They have kept their colourful, elaborate parade uniforms.