We have recently reported that the player of the Hungarian national football team, Nikolic Nemanja has been signed by Chicago Fire as a designated player. The American team welcomed him with high hopes. They also shared several posts on their Facebook page to introduce the new player, which were flooded by Hungarian fans and the most hilarious comments.

Check out Chicago Fire’s Facebook page if you have a few spare minutes, because Hungarian fans put on quite a show. In the beginning they only commented on the posts that concern Nikolic, but then started leaving recurring comments on basically every post. The most common one is “No Niko, No Party!” which has become a real slogan.

By the way, this is not the first time that something like this happens. Hungarians seemed to be similarly creative in the case of Bálint Bajner one and a half year ago.

Most of the comments combine Hungarian and English words, which result in funny Hunglish sentences. Let’s just say that the fans seem to be very creative and they all want to see Nikolic play. The comments popularize the Hungarian player in a witty way. Some people express their best wishes and messages with English words, written phonetically in Hungarian, while others believe that this is the beginning of a great Hungarian influence in the USA.

The most liked comment (3384 likes as of now) goes like this: “Dear Chicago Edzőbá! You know a dolgod: Niko put in the kezdő eleven, because, No Niko, No Party!” It aims the coach and asks him to definitely put Niko in the starting eleven.

Another gentleman wrote that “Hamarosan itt is átvesszük a hatalmat! Welcome Hungary amcsi barátaink!” predicting that Hungary will take over Americans. This type of comment could be listed in the “Hungary to take over the USA” group, because many people forecast that Chicago will turn into a Hungarian village.

Others ask the team to treat Niko well, because he is the best striker in East Europe. “Dear Chicago Fire sporttársak! I ask benneteket, that our Nikonk honor, love and támogassátok! He thanks Nektek for this gólokkal, but azok very big and bisected nyílik the Lake Micsigen! NO NIKO, NO PARTY! Hajrá NIKO – Hajrá Chicago Fire!” This gentleman asks fellow sportsmen to support Nikolic and he will show his gratitude with big goals. 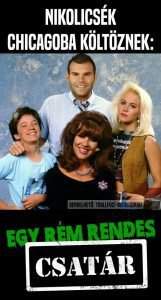 The meme says: The Nikolic family moves to Chicago – Married with Children – Striker edition (The series is called “Egy rém rendes család” in Hungarian, while striker is “csatár” so “család” can be easily replaced with “csatár”)

“Háj ebribádi, edzőbá plíz, Niko put in de Kezdő eleven, bikouz megfejellek, ju no dhisz: no Niko no party”. This is a great example of the phonetically written sentences. The one leaving the comment asks the coach and everybody to put Niko in the starting eleven or else he’ll headbutt them.

And the #NoNikoNoParty and the “put Niko in the starting eleven” comments go on and on… The Hungarian fans have flooded Chicago Fire’s Facebook page. We don’t know what the team thinks about this, but, hopefully, they see these comments as harmless jokes and the manifestation of how much fans like Nikolic Nemanja.