US President Barack Obama has invited Hungarian PM Viktor Orbán to attend the 2016 nuclear security summit held in Washington, D.C., which Orbán accepted. Bertalan Havasi, the head of the Prime Minister’s Press Office, previously refused to brief the press on Orbán’s programme in the US capital, origo.hu writes. 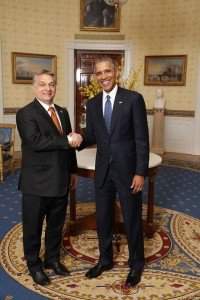 nuclear security summit, and the President shook hands with every politician individually, including Viktor Orbán.

Vs.hu tried to gain information on Viktor Orbán’s Washington programme, but Bertalan Havasi, the head of the Prime Minister’s Press Office, said that everyone will be filled in on the details via social media.

Leaders of 56 countries attended the summit on nuclear security and discussed the question of hindering the spreading of atomic weapons, economic affairs, climate protection, and the security of nuclear power plants.