The Budapest finals were held as part of the Sirha Budapest international gastronomy exhibition, with teams in the kitchen from seventeen countries. The Hungarian team was headed by Bence Dálnoki, sous chef of Budapest’s Michelin-winning Stand Restaurant – MTI reported.

According to the contest’s official announcement, the victory of Denmark represented by Brian Mark Hansen and his Elisabeth Madsen commis at the Bocuse d’Or Europe 2022, the European selecting event of the famous gastronomy competition, closes this Thursday 24 March two days of high-level competition. 10 European teams have now qualified for the grand Finale of the Bocuse d’Or which will be held on 22nd and 23rd January 2023 at Sirha Lyon. 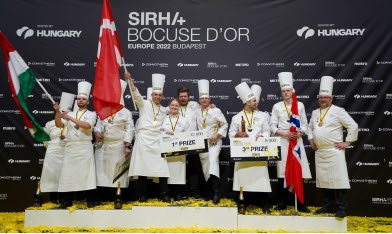 THE RANKING OF THE BOCUSE D’OR EUROPE 2022

The 17 members of the jury were keen to reward technique, mastery of the products and recipes highlighting the Hungarian terroir. The 17 candidates had 5 hours and 35 minutes to create a platter based on venison, foie gras, cottage cheese and sour cream, as well as a 100% vegetable dish based on local varieties of potatoes.

« Restaurants that work with local products – respecting the seasons – are the future of cuisine, comments Ana Roš, Chef of Hiša Franko and Honorary President of the contest. This competition involves both following strict rules and giving importance to the identity of one’s country. Even if the world of cooking needs time to evolve, we can only note its efforts, especially in terms of inclusion. The Bocuse d’Or is a representation of this. »

On 22nd and 23rd January 2023, 24 chefs from all over the world after 4 continental selections (Bocuse d’Or Europe, Bocuse d’Or Americas, Bocuse d’Or Africa & Bocuse d’Or Asia-Pacific), will compete for the grand Finale of the Bocuse d’Or during Sirha Lyon.

The next edition of the Bocuse d’Or Europe will take place in the spring of 2024 in Trondheim, Norway.