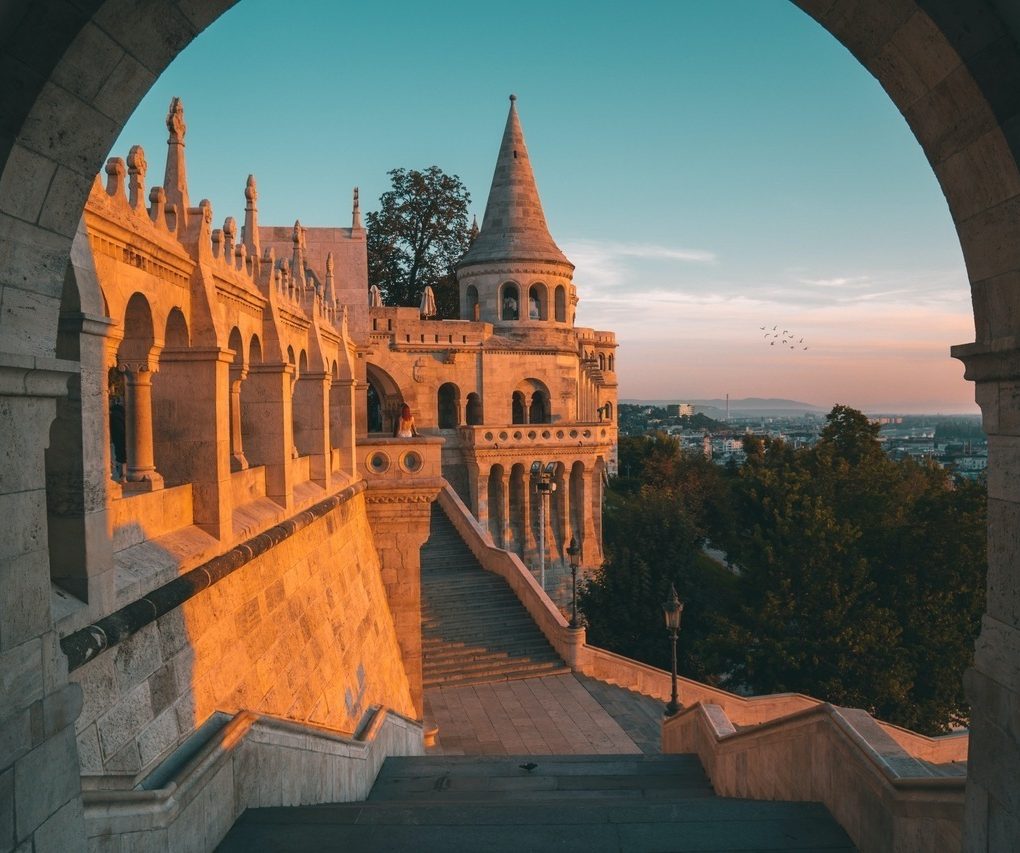 There are many amazing places to see in Budapest, but this article will take you on a rather unusual tour. You can read about the most amazing places that are not only among the top tourist attractions but are also valuable monuments of the Christian faith. Enjoy this guide, not exclusively for Catholics. The adventure starts from Heroes’ Square.

The square was built in 1896 to celebrate the 1000 years that passed since the formation of Hungary. “When approached from the avenue, the 36-metre column topped by the Archangel Gabriel can be seen from afar. The column and the group of statues placed near its base constitute a unified visual image with the monuments arranged in two semicircles. Under their arcades stand effigies of the great figures of Hungarian history, created by sculptor György Zala.

The square, designed by Albert Schickedanz, sits between the buildings of the two museums seen facing Heroes’ Square; the Hall of Art is on the right, and the Museum of Fine Arts, internationally known for its permanent collection and temporary exhibitions, is on the left. Its collection includes works by Raphael, Leonardo, Dürer, Pieter Bruegel the Elder, Rembrandt, El Greco, Goya, Renoir, Toulouse-Lautrec, Gustave Courbet, Claude Monet, Édouard Manet, and Auguste Rodin, and these are complemented by its world-class temporary shows to make it a real treat for art aficionados. Together with Heroes’ Square and Andrássy Avenue, it is considered a UNESCO World Heritage site,” writes budapestinfo.hu. Near the square, you can also visit the park with its own castle. It is a replica of a Romanian castle. Other tourist attractions can be reached from here as well.

Our tour will continue from Saint Stephen’s Basilica where the hop-on-hop-off buses and other regular city buses stop. It is an easy-to-find venue.

The Basilica was named after Saint Stephen, the first king of Hungary and the founder of the Hungarian state. It is the second-tallest building in Hungary, in an area filled with restaurants, cafes, great places to take photos, and it is close to the Parliament.

A 10-minute walk from here, another church is being restored right now. However, the building can be viewed from the outside. Another 8 minutes away, another Catholic church offers a beautiful sight. A third church worth seeing is also close by. The Inner City Church is a pleasant sight to marvel at. Many architectural elements and styles combined catch the eye in the tranquil atmosphere of the church. Bishop Saint Gellért was buried in this church.

The next destination is the Central Market Hall, which is followed by crossing Liberty Bridge over to the Buda side where Catholic landmarks of Budapest will await.

The Central Market Hall is one of the best places to find good products and real hungarikums. There, you can find healthy veggies, but also sausages and other products if you do not follow a vegetarian or vegan diet. Crossing the Liberty Bridge, on the Buda side, two Catholic venues can be found. Overlooking the Danube, a large cross and a statue of St. Stephan mark the location of the rock chapel.

Legends say that a hermit took shelter in the cave. Centuries later, in 1926, a group of pilgrims made a shrine in the cave and dedicated it to the lady of the Hungarians. The cave also features memories from Hungary’s history. An eagle recalls the time when Polish refugees were sheltered in the cave during WW2 when some of them even disguised themselves as monks in order not to be caught. A cardinal is also said to have spent time in the cave, praying before imprisonment, in the Communist era. Today, this is the third-most-visited church in Budapest.

Atop Gellért Hill, the Citadelle embellishes the city. This fortress was built by Austrians in the 19th century to resist Hungarian revolutionaries. The Statue of Liberty looks over the capital. Another important landmark in Budapest is the monument erected in honour of Saint Gellért, a missionary from Italy. He was also a bishop in Hungary in the 11th century, who evangelised the people and was also the spiritual father of the royal family. After the king’s death, chaos took over, and Saint Gellért refused to crown Samual Abba, which led to him being tortured and eventually killed by a pagan mob. He was rolled down the hill, and that is why he is now considered a martyr and the hill carries his name.

On your sightseeing tour, you can enter the Buda Castle through Várkert Bazár. Then, you can go to Matthias Church and the Fisherman’s Bastion, after which you can visit the Church of Mary Magdalene.

Beginning in the 13th century, the Buda Castle was the fortress and the palace of Hungary’s kings. The massive Baroque palace was built in the late 1700s and is now home to museums and exhibits. Another artistic work, a statue of Mary and the little Jesus, embodies the ideology of Christianity. The Matthias Church is an exquisite building with a rich historical value. In 1526, the Ottomans took over Buda, and during their reign, the church functioned as a mosque.

However, a statue of the Madonna remained intact. In 1686, a wall collapsed, and the statue was revealed when the Muslims were praying, and the city fell on the same day. The Fisherman’s Bastion is also one of the most remarkable and most-loved places by tourists, which is worth seeing and taking a picture of. The Church of Mary Magdalene does not look as captivating a sight as other churches, but it was a monumental place in its days. This church allowed Christians to stay true to their faith when the Matthias Church was turned into a mosque.