The EU is working on a new central Asia strategy which will devote more attention to the Kyrgyz Republic and strengthening the Partnership and Cooperation Agreement between the two is also being discussed, Szijjártó told MTI.

By paying closer attention to central Asia, the EU is giving Hungary and the Kyrgyz Republic a chance to boost their economic cooperation, Szijjártó said.

The parties agreed to focus economic cooperation on four areas, with the primary emphasis on the pharmaceutical industry. Szijjártó noted that Hungarian drugmaker Gedeon Richter already sells its products in Kyrgyzstan and has a representative office there.

Cooperation will also focus on health-care developments with Hungary supplying health-care products to the Kyrgyz Republic.

The two countries agreed that Hungary would export environmental protection and water management solutions. The fourth area covered by the agreement is energy infrastructure, particularly pertaining to electricity supply and hydropower.

The economic cooperation agreement, which will be signed later this year, will set up an economic mixed committee. Under the deal, Hungary’s Eximbank will open a 27.7 million dollar credit line to support business activities between Hungarian and Kyrgyz companies.

Szijjártó agreed with his partners that Hungary would offer scholarships to 25 Kyrgyz university students.

He said Hungary and the Kyrgyz Republic’s advanced ties could help the EU and the Eurasian Economic Union develop their ties in the future.

The parties agreed to initiate a cooperation platform between central Asian countries and the Visegrad Four grouping of Hungary, Poland, Slovakia and the Czech Republic. 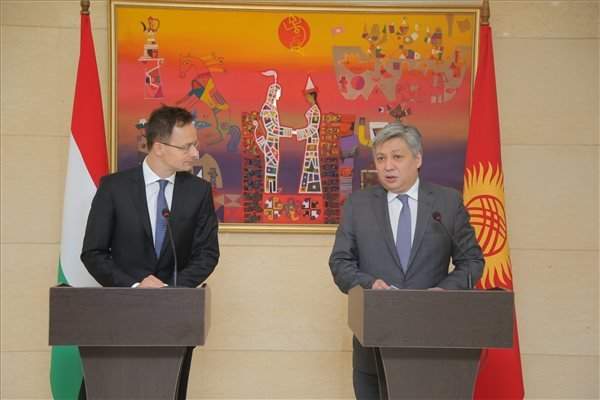