Washington, DC, February 15 (MTI) – Talks with business leaders in Texas could bring new investments to Hungary, in the service or the automotive sectors, Foreign Minister Péter Szijjártó told MTI ahead of his talks on Monday. 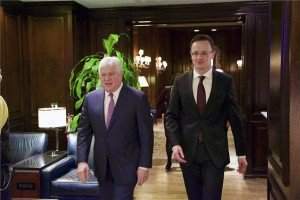 Hungary’s foreign minister is meeting business leaders and a United Nations official for talks in Texas and New York.

Szijjártó told MTI that the new US investments could create some 500 jobs in Hungary.

Szijjarto will sign a cooperation agreement between Hungarian universities and universities in the Dallas area with Dallas Mayor Mike Rawlings.

On Tuesday Szijjártó will head to New York to meet representatives of Coca-Cola, Lilly, Pfizer and Warburg-Pincus and he will attend the founding session of the American-Hungarian Business Council.

He will later meet United Nations Under-Secretary-General for Political Affairs Jeffrey Feltman and Special Adviser on the Summit on Addressing Large Movements of Refugees and Migrants Karen AbuZayd.