Following are some of the top business and finance news from the past week: 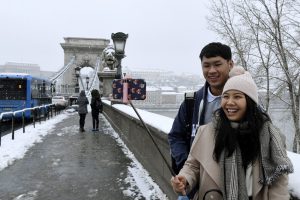 S+P Global Ratings upgraded Hungary’s sovereign rating to ‘BBB’, two notches over the investment grade threshold, with a ‘stable’ outlook. “The upgrade reflects Hungary’s sound growth prospects, supported by high private savings and real wage gains sustaining domestic demand, as well as the ongoing expansion of export capacity in the automotive and services sectors,” S+P said in its rationale for the ratings action.

ORBÁN PROPOSES MATOLCSY AS NBH HEAD FOR ANOTHER TERM

Prime Minister Viktor Orbán will propose György Matolcsy for another term as governor of the National Bank of Hungary (NBH), the PM’s press chief said. Under the watch of Matolcsy, a former economy minister whose hallmark is unorthodox, albeit effective, policy, the central bank base rate has been brought to a historic low. He has also overseen a reversal in corporate lending trends supported by the NBH’s Funding for Growth Scheme, and he helped coordinate the conversion of retail FX mortgages into forints, reducing household debt by some 1,000 billion forints.

Production volume of Hungary’s automotive industry, which accounts for about 27 percent of the output of Hungary’s manufacturing sector, rose by an annual 9.9 percent in December, the KSH said in a detailed reading of data. Output of the computer, electronics and optical equipment segment, which makes up 13 percent of total manufacturing sector output, jumped by 17.9 percent during the period.

The National Bank of Hungary’s indicator for core inflation, excluding the effects of indirect taxes, rose to 3 percent in January, the highest rate since February 2012.

NBH deputy governor Márton Nagy said in January that if core inflation excluding tax effects reaches or rises above 3 percent, this could be sufficient grounds for the central bank to start tightening monetary policy.