Ramesh Terdal is a well-known visual artist and documentary film director from Karnataka. He was born in 1972 in a place called Gadag, India. He obtained his Master degree in painting at Bangalore University, Karnataka.

He studied film and art in Paris, Milan, Rome, Vienna. During his work, he received approximately 12 national and state awards. Since the 20 years of his journey in the field of art, he has been invited to around 18 countries and national art camps. Ramesh published many articles in foreign magazines and several reputed daily newspapers in India.

He exhibited his works as an individual and also in a group at exhibitions all over the world: Austria, Slovenia, Italy, England, Texas, Florida, Paris, India.

This time, Ramesh Terdal and his foundation, the “NIRVANA Art Foundation”, presented several paintings by various Indian and Singapore painters in different styles, as well as works of European painters.

Ramesh Terdal’s paintings are introspective; he seeks with sincerity to get to the heart of his being. What we see on the canvases is the experience accumulated through observation,

Terdal began as a portrait artist, but “not the usual way”. “I don’t paint it from a photograph but perception. I always wanted my art to grow from knowledge, which it has. I have come a long way. Can you imagine a boy from Gadag making it big in Bangalore and beyond? It was the urge in me that helped me to grow. It was my burning desire to travel and see the masterpieces in museums across Europe. In 2011, I was invited to an art symposium in Italy and it changed everything,” says Terdal.

His earlier works- are portraits, faces in oil and watercolours expressing feelings through gestures.

He works on any topic, he creates series of paintings. Different themes affect him inside as identities, love, desires, touch, feelings and all in a yellow series.

„In an artist’s opinion, there is no beauty like the rustic beauty of a peaceful village. Hence, I use shades of brown to draw the attention of the onlookers towards the soothing environment of rural areas. Many times I use metaphors of my present life. However, sometimes, the onlookers are even invited to interpret vivid scenarios. My work uses different mediums outwardly only to depict my inner journey.”

Terdal’s last art works evolved from his psyche-intuitive expressions. They are abstract in appearance yet- forms of animals, birds, aquatic figures like fish, human forms and other magical images. They are mystical in appearance, travel from the surrealistic world of backgrounds.

The works exposed here are a new series painted for this occasion, but they were shown in Bengaluru (India) on May 11, 2018. It was a short show, but the bigger the sound in the Indian press. 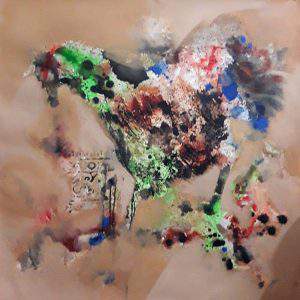 In conclusion, I would like to quote a few lines about the writings and the interviews in the Indian press:

“Unlike Ramesh’s earlier artworks – where he used to paint human forms, portraits with definitive forms and figures have now transformed into imaginary forms as if floating on the colorful water of ocean. The forms composed of vivacity where these forms gradually dramatically influence each other.  Terdal’s art is marked by minimalism and imagery which at once is abstract yet identifiable.”

„Ramesh Terdal is one of those young artists who have been constantly painting and his visual language is evolving into a more ingeniously layered articulation over the period of time. Terdal is constantly striving and working to create a space of his own; like many other artists and this transition is apparent in many of his works arising questions of identity and influence.”

”Jackson Pollock used a style where he would allow the paint to drip from the paint can. Instead of using the traditional paint brush, he would add depth to his images using knives, trowels, or sticks. This form of painting, had similar ties to the Surreal movement, in that it had a direct relation to the artist’s emotions, expression, and mood.” 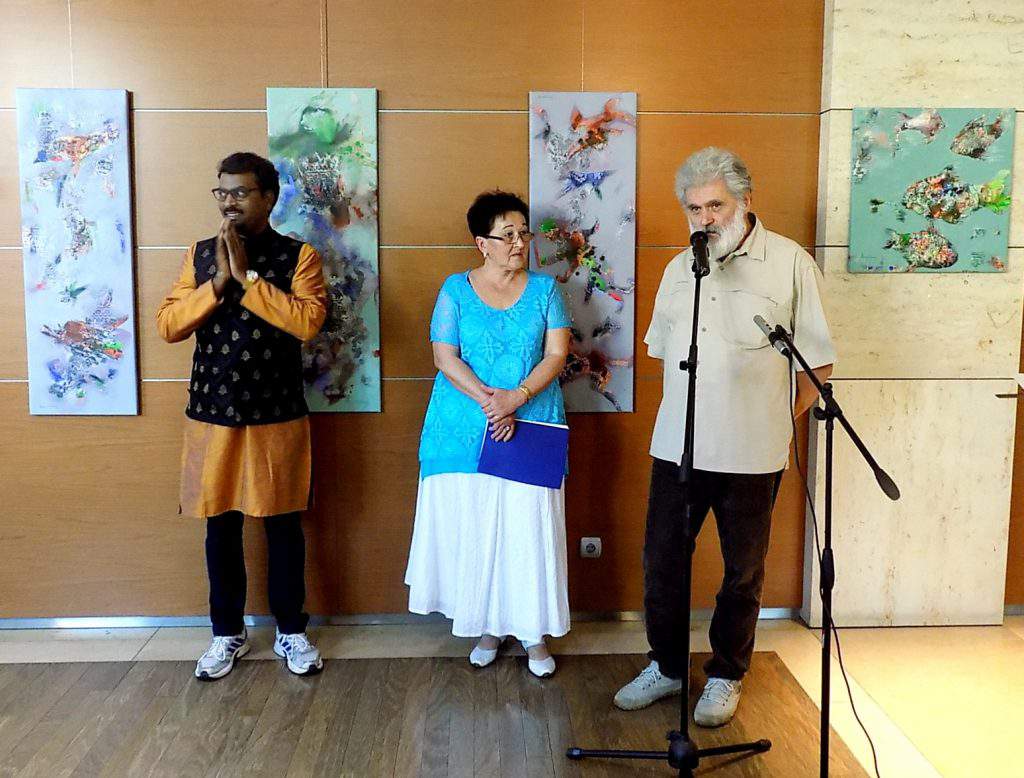 “Croce said: what is vague and ambiguous is complete. He was of the belief that it is not possible to express your complete feelings on a canvas. I am trying to see if the other is possible. With Pollock, I follow his way of throwing colours which then drip onto a canvas but in an Indian context and I am inspired by the application of plain colours in Antonio’s work. You see all this in my art but in my own language,” says Terdal.

“From the time of his bachelors in Bangalore University Ramesh Terdal has explored and experimented with varied subjects and have sustained a dual commitment- to his social concerns and to his medium, to his subjects and to the making of his art, with equal sincerity and concern. From his strong nude canvases to the study of piety Buddha imagery he has arrived at a contemporary take with images from urban and popular subject matter with a new set of possibilities to articulate his social concerns in a simple and candid idiom.”