The first scheduled Lufthansa flight from Munich to Debrecen arrived on Monday morning. From now on, the airline provides travel between the two cities three times a week, origo.hu reports.

The first flight was welcomed on Monday according to tradition: the 98-seat Bombardier CRJ 900 rolled into Debrecen Airport under the double arches of a water salute. Although the official launch date of the flights is April 11, tickets can be booked only from the 25th. Return tickets cost 40,100 HUF (€128.67), business class tickets cost 134,700 HUF (€432.23).

According to origo.hu, the airline flies three times a week, on Mondays, Wednesdays and Fridays, between the two cities. The new flights depart from Debrecen at 9:40am, which makes them suitable for transfer in Munich. The return flights are less convenient; the 7:30 flights from Munich will push passengers, who want to transfer, to stay one night in the German city. 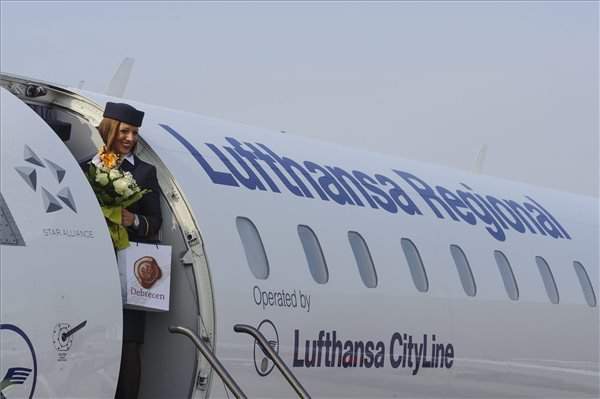 Flying from Debrecen, passengers can transfer to more than 130 flights in Munich, and it can be an alternative solution for Slovakian, Ukrainian or Romanian travellers and companies as well. In 2011, the Debrecen Airport was used by 18,000 people. Last year, this number was 180,000, and it is predicted to reach 300-350,000 this year.

Last year, 1.6 million people travelled by the Lufthansa Group’s flights in Hungary, which constitutes a 12pc increase in the number of passengers, Gábor Antal, head of the Hungarian group announced. Germanwings/Eurowings achieved the biggest growth among the group’s airlines with 38pc; this is partly due to the fact that both the Budapest-Hamburg and Budapest-Düsseldorf flights are provided by the airline.