Message In A Bottle Found: Who Are The Men In This Photo? 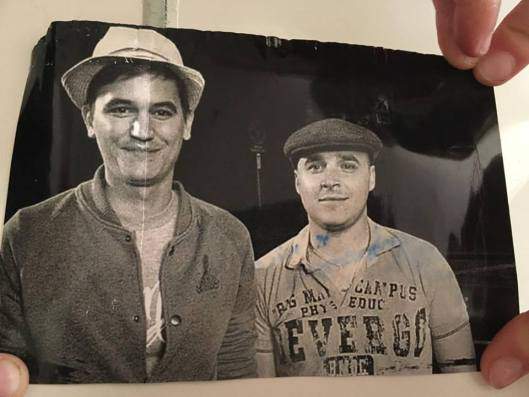 messageinabottlehunter.com – Manon van der Molen is the kind of person who picks up trash off the beach. Plenty of people get upset about plastic trash at sea, mucking up our beaches. But Manon? She actually does something about it.

“I hate all the trash in the ocean,” Manon told me. A kindred spirit! She has even volunteered with the Archelon Marine Turtle Protection Association.

“My kids are amazed by all the plastic in the ocean and do not understand why people do that. See–even kids understand!” Indeed. I think kids often understand these things better than adults. It’s obvious, even to children, that too many of us are not taking care of the ocean. But we could.

So, when Manon was walking the beach with her family–her husband and three kids–on May 5th, 2017, at De Haan, Belgium, she was picking up plastic trash. That’s a great way to help! And sometimes, among the trash, we stumble upon a little “treasure”–a reward for cleaning the beach, in the form of an unexpected human connection. A reminder, perhaps, that while most of what’s floating around in the ocean is simply trash that shouldn’t be there, still…maybe, just maybe, one in a billion or so pieces of flotsam can create an amazing and beautiful connection between strangers.

“That’s when I found the tube,” she told me. The “tube” she found was a little glass vial, corked and sealed, with a message inside. It stood out from all the trash on the beach, and the whole family felt a jolt of excitement at the discovery–they immediately hoped it would lead to a connection!

Manon’s Message in its Bottle

“My kids were very excited,” she added. “We waited a couple of hours before opening it…enjoying the excitement of what was in there… imagining what if…”

Anything could be in there! That stamp on the outside–“Send your love away!” What was that about? Was this a romantic message? Or does it mean something more like, “Share your love with the world”? Only one way to find out…

“When we finally sat down to open the bottle with the whole family… we couldn’t open it!” Manon said. “The cork was sealed with candle wax. Smart! Finally we decided to break the glass to get the message out.”

“Inside, we found a picture of two young men who seem to be friends.”

Do you recognize these men? 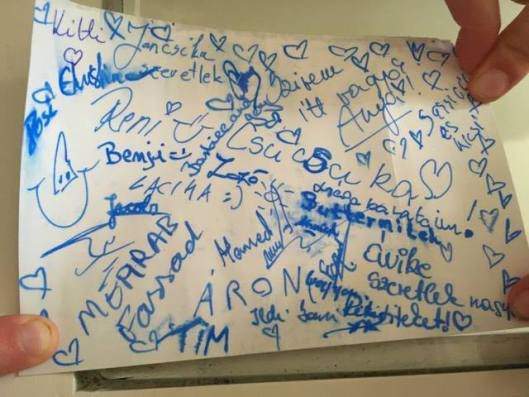 “On the other side there are lots of signatures.”

“Our first thought was that this might be a farewell card to these guys. We are honored to find this and would like to return the card and send them a little bit of love from a Dutch family!”

But, my friends, who are we looking for? The guys in the picture? Or the people who signed their names on the back? I say we look for both!

So, first thing’s first: What language or languages appear among the signatures? Manon thinks Hungarian, while I thought there might be some Norwegian in there…

If we can decipher the language and some of the names, I bet we can find these folks! Let’s do it!