The expression of dates, days and numbers form a crucial and everyday part of our lives. Just think about it, one of the first things you learn in a foreign language is how to tell your age. Surprise-surprise, the Hungarian language has some tricky ways here as well, but we try to break down the most basic expressions, words to you 🙂

Keep in mind that we are not linguists in any way, we’re just as dazzled by the curiosities of the Hungarian language as foreigners are. So this series doesn’t aim to explain the etymology of words, it’s more so a fun take on our language. We try to bring Hungarian closer to you with witty learning cards made by Daily magyar, a language-enthusiast person, whose posts give an insight into the complexity of the Hungarian grammar. But don’t worry, it’s all done in an easy-going way, so that it can make learning fun.

Let’s start with numbers in Hungarian. ‘Number’ is called szám in our language, which also has two other meanings: ‘my mouth’ and ‘song’ (mostly used in slang). Numbers from 1 to 10 and round numbers go like this:

Hopefully you can see some logic. What is quite funny for instance is that hét has two meanings: ‘seven’ and ‘week’. So you can say ‘One week is seven days’ – ‘Egy hét hét napból áll’. 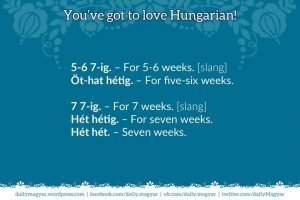 There are many ways to use hét as a number. The following photo is true for all numbers, but it is probably the most spectacular using ‘seven’:

There’s also a quite frequently used slang expression with szám:

Moreover, there’s a popular Hungarian proverb with the magical number 3:

To be honest, there are quite a few proverbs, sayings with numbers, but one of the most well-known and most used one is the following: 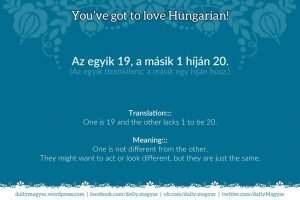 Next up is how to express the date in Hungarian. ‘Date’ is called dátum in Hungarian. It is actually different from English, so it might cause you problems in the beginning. This is how we write the date:

You might happen to like reading about history, in which case you’ll definitely encounter the Hungarian equivalents of B.C. and A.D.

Let’s quickly go through how we say the months in Hungarian. It’s not that bad at all, we promise:

Now that you know the names of the months, you might be interested in the names of the days. ‘Day’ is nap in Hungarian, but keep in mind that it also means ‘Sun’. There’s a good learning card for this purpose as well, which even helps a bit with suffixes:

The most unique might be hétfő as it is very different from how other nations say ‘Monday’.

To finish off the topic of days, and the article itself, we wanted to show you the Hungarian words for an important day: birthday.

Hungary's defence spending will continue to increase in 2021, to 1.66 percent of GDP,…